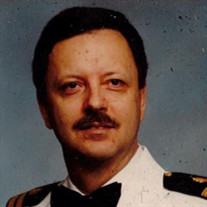 William Kurt Simpson, age 73, died at St Francis Select Specialty Hospital of Memphis on Saturday, August 1, 2020. Kurt was born on November 18, 1946 in Topeka, KS, the son of the late Jack Benard Simpson and Norma Elaine Williams Simpson. Before graduating from Leesville High School located in Natchitoches, LA, he participated in the SROTC program. Kurt attended Northwestern State College in Natchitoches, LA graduating May 28, 1999 with a Degree of Bachelor of Arts. He enlisted in the US Army and was commissioned as a Second Lieutenant. His first duty station was AFAS (Field Artillery School) in 1970 at Fort Sill, OK. LT Simpson attended Army Officer Rotary Wing Aviation School at Fort Rucker, AL receiving his Helicopter Pilot Training. His US Army service carried him all over the United States and Germany. He proudly served in the US Army during the Vietnam War, serving as both a Helicopter Pilot and Army Post Exchange Logistics Officer. Kurt's last duty assignment and major command in the Army was HHC 5th Infantry where he was honorably discharged as an US Army Captain. Captain Simpson received the following accommodations and medals during his time of service while on active duty in the US Army.Bronze Star, National Defense Service Medal, Vietnam Service Medal, with 2 bronze service stars, Vietnam Campaign Medal, Army Aviator Badge Vietnam Cross of Gallantry with Palm Army Commendation Medal, Overseas Service Bars (2), and the and Army Service Medal. After being honorably discharged from the Army, Kurt again attended Northwestern State College graduating with a Registered Nursing Degree. After graduation he worked for the Veteran's Hospital in San Antonio, TX. While working at the Veteran's Hospital in San Antione, TX, Kurt enlisted in the US Navy with the rank of LT being equal in rank as to a US Army Captain. LT Simpson was transferred to Balboa Naval Hospital in San Diego, CA serving on active duty stateside during the Gulf War. LT Simpson retired from US Navy after twenty-two years of Military service to his country in Aug 1994. He is survived by his wife of 27 years, Linda Diane Lawson Simpson of Jackson, TN; a stepson, Joseph Gene Hudgins, daughter-in-law Courtney Brown Hudgins, three grandchildren, Kaitlyn Barbara Brown, Bethany Janice Brown and Jonathan Michael Deaton Hudgins, all of Dickson, TN; a sister, Carla Jo Simpson-Ynez of New York, NY, and a niece Jeni Raye Simpson Ynez of Oakland, CA. SERVICES: A funeral service will be held at 11:00 AM Wednesday, August 5, 2020 in the chapel of Arrington Funeral Directors, with Rev. Gary Snuffin officiating. Burial will follow in Rutherford, Gibson, CO, TN at Rutherford Cemetery with full military honors. A visitation will be held from 10:00 AM until 11:00 AM prior to the service

The family of William Kurt Simpson created this Life Tributes page to make it easy to share your memories.