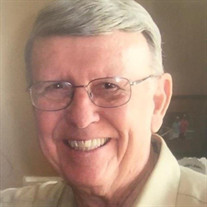 William S. “Bill” Gregory, Sr., age 94, died on February 27, 2020 at his residence surround by his family. Bill was born on August 14, 1925, the son of the late Rufus Gregory, Sr. and Janie Conger Gregory. He was a graduate of Union University, where he played football and was a member of the SAE Fraternity. Bill served in the South Pacific during WWII as a Navy Seabee. He loved his country and was so proud of this time of service and cherished the relationships that were formed during this time. He was a man of many talents as he for many years assisted Rosenbloom’s with the display design and decoration of their store windows. For many years he traveled the area as a paper salesman, as well as, operating his own business, Gregory Signs, for over thirty years. He was a member of First Baptist Church of Jackson, where he was a deacon emeritus, having served as chairman on two different occasions. He was the Sunday school coordinator, as well as, the “Staff Artist” for many projects at the church. He was a man of great integrity who worked hard to provide for his family and was a great example to them and others with his dedication and love of his Lord. He was preceded in death by two children Steve Gregory and Lee Gregory and a brother, Rufus Gregory, Jr. He is survived by his wife of seventy-two years, Petey Gregory of Jackson, TN; his son, Lawrence Gregory of Jackson, TN; his daughter, Molly Wright and husband Joel of Jackson, TN; nine grandchildren and sixteen great grandchildren. The family would like to thank Charlene Taylor with Home Instead for taking such good care of Mr. Bill the past three years. Also, thank you to AsercaCare Hospice and Lea Washington for their excellent care the past few months SERVICES: A memorial service will be held at 3:00 PM Sunday, March 1, 2020 in the Sanctuary of First Baptist Church with Dr. Justin Wainscott and Rev. Dan Bruce officiating. The family will be receiving friends from 1:00 PM until 3:00 PM Sunday, prior to the service at the church. The family is requesting that memorials be directed to First Baptist Church, 1627 N. Highland Ave., Jackson, TN 38301.

The family of William S. "Bill" Gregory Sr. created this Life Tributes page to make it easy to share your memories.