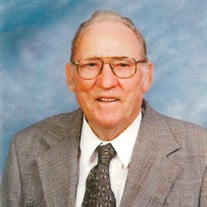 William “Bill” R. Eason, age 93, died on Thursday, May 26, 2016 at the Jackson Madison County General Hospital. Bill was born on August 5, 1922 in Henderson County, TN, the son of the late Roy and Annie Mae Wheeler Eason. He was married to Geneva June Eason who preceded him in death in 2004. He was a veteran of the United States Army serving in WW II as a sergeant in the 99th Infantry Division of the 393rd Regiment Company K, where he was wounded on December 26, 1944 in the Battle of the Bulge. He was employed for over forty years with Hubert Owens Construction Company retiring as a Construction Superintendent. He was a member of Friendship Baptist Church of Medina for over thirty-five years, serving as a Sunday school teacher for twenty-five years. He was a Master Mason and a member of St. John’s Lodge 332. He is survived by his daughter, Bobbie Eason Britt; two grandchildren, Lyn Tisdale (Heidi) and Tony Tisdale (Mary); five great grandchildren, Jacob Tisdale (Alyssa), Shelby Tisdale, Colton Tisdale, Katie Tisdale and Airiel Eddings and two great-great grandchildren, Sophia Tisdale and Teagan Flowers. He was preceded in death by eight brothers and sisters, Leroy Eason, Joe Allen Eason, Lonnie Eason, John A. Eason, Elmer Eason, Louise Baker, Viola Bush and Billie Dean Eason. SERVICES: A funeral service will be held at 2:00 PM Saturday, May 28, 2016 at Friendship Baptist Church of Medina, with Rev. Steve Osborne and Rev. Landon Mason officiating. Burial with military honors will follow in Highland Memorial Gardens. The family will be receiving friends on Saturday, May 28, 2016 from 11:00 AM until 2:00 PM at Friendship Baptist Church. Arrington Funeral Directors, 148 W. University Parkway, 668-1111 www.arringtonfuneralgroup.com

The family of William R. "Bill" Eason created this Life Tributes page to make it easy to share your memories.