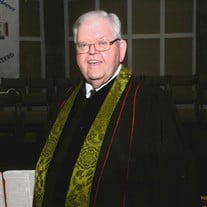 “Take thou thy authority – to preach the gospel and to administer the sacraments” was a ministerial vow Bill took over sixty years ago – and he followed it faithfully up to Thursday, August 13th, when it changed to “Well done, thou good and faithful servant, enter into the joy of thy Lord.” Rev. William R. McClarin, age 82, died on Thursday, August 13, 2015 at the Jackson Madison County General Hospital. A native of Kevil, KY, he was born on May 8, 1933, the son of the late Rev. Paul T. and Frances Miller McClarin. He was a graduate of Lambuth College and the Memphis Theological Seminary. Bill was a minister with the Memphis Conference of the United Methodist Church for sixty years. During his time with the conference he was involved with the Board of Evangelism and the Board of Pensions and Insurance. He had a passion for youth and for over twenty years he participated with the Lakeshore Campground as a counselor in their youth camps and was known for teaching Folk Dancing and being a very competitive ping pong player. While serving churches in Humboldt and Covington he was a member of the Humboldt Department of Education School Board and volunteering as a member of the “Chain Gang” for the local football teams. He was an avid reader of the Bible and History particularly the Civil War. He has been associated with Northside United Methodist Church for the past fifteen years as their Associate Minister with a focus on Visitation and Pastoral Care and the past two years as their Pastor Emeritus. For eighty-two years he served his God and his family, as they were his life and his inspiration and he will be greatly missed by his wife, his children and grandchildren. He is survived by his wife of sixty years, Sara Ramsey McClarin of Jackson, TN; two sons, Phil McClarin and wife Sarah of Jackson, TN, Greg McClarin of Nashville, TN; a daughter, Rebecca Owen and husband Scott of Louisville, KY; a sister, Anne Weber and husband Henry of Paris, TN; six grandchildren, Derrick McClarin and wife Ashlie of Fredericksburg, VA, Kristen McClarin of Humboldt, TN, Sydnie Nickell and husband Jacob of Milan, TN, Christopher Owen, Taylor Owen and Ashley Owen of Louisville, KY; and four great grandchildren, Caleb McClarin, Joshua McClarin, Adrian King and Lydia Nickell. SERVICES: A Celebration of Life service will be held on Sunday, August 16, 2015 in the Sanctuary of Northside United Methodist, with Dr. Don Thrasher officiating assisted by Rev. Russell Gallimore. Burial will follow in Highland Memorial Gardens. The family will be receiving friends on Sunday from 1:00 PM until 4:00 PM prior to the service at the church. Pallbearers will be Mike Conklin, Tim Harris, Scott Owen, Jacob Nickell, Derrick McClarin, Christopher Owen and Taylor Owen. The Pacers Sunday school class and all active and retired ministers are asked to sit together for the service. Memorial contributions may be directed to Northside United Methodist Church, 2571 N. Highland Ave. Jackson, TN 38305. Arrington Funeral Directors, 148 W. University Parkway, (731) 668-1111 www.arringtonfuneralgroup.com

The family of Rev. William R. McClarin created this Life Tributes page to make it easy to share your memories.

“Take thou thy authority – to preach the gospel and to administer...