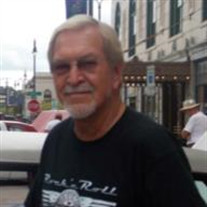 William J. Hall, 81, completed his journey to heaven Tuesday, March 20, 2018 in the presence of his family at his home. He was born May 15, 1936, in Jackson, TN. Son of William A. “Billie” Hall and Olive Mae Wooten Hall. He attended Jackson City Schools and Union University. After college, Bill pursued a career in the construction and plumbing supply sales industry. In 1978, he went to work for the US Postal Service as a clerk, then later becoming a carrier, retiring in 1998. After retiring until the time of his passing, he started a mowing service and supported men of Global Ministries. At the age of 65, he purchased a motorcycle and from there he became the president of CMA, Christian Motorcyclists Association, where he and Nancy Jane, his wife of 61 years, began a journey of ministry serving men and women in prisons. Also Bill and Nancy were known for their ownership of the Old Town Western Store in Jackson from 1979 to 1983. During that time Bill met Carl Perkins and traveled with him, working as his friend and road manager. He enjoyed the many fond memories and friendships created during that time in his life. Bill loved to fish, hunt and enjoyed working outdoors. He had a passion for the broken hearted people and found ways to be Jesus to the needy. That truly was his legacy. Bill is survived by his wife Nancy Jane, his daughter Tresa Whitehead (Jay), son Andy Hall (Melissa), grandchildren John Whitehead (Becky), Leah Claire Hall, William Hall and Olivia Hall, and many special nieces and nephews. He was preceded in death by his parents and granddaughter Sarah Beth Whitehead in 2005. Fellowship Bible Church, 41 Pleasant Plains, where Bill was a member, will host the visitation Friday, March 23, 2018, from 4:00 – 6:00pm and the celebration service, Saturday, March 24, 2018 at 2:00 pm. Burial to follow at Ridgecrest Cemetery. In lieu of flowers, memorials may be sent to Sarah Beth Whitehead Memorial Fund c/o WTH Foundation 620 Skyline Drive, Jackson, TN 38301 and RIFA, 133 Airways Blvd., Jackson TN 38301. Arrington Funeral Directors, Jackson, TN 38305

The family of William J Hall created this Life Tributes page to make it easy to share your memories.