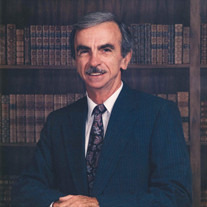 WILLIAM H. (BILL) STEWART October 12, 1936 - April 7, 2017 Mr. William H. (Bill) Stewart entered into the gates of Glory on Friday, April 07, 2017. Bill was born in Jackson, Tennessee. Although he traveled extensively performing as a gospel singer, he lived almost all of his life in the East Union and Beech Bluff communities. He graduated from Beech Bluff High School where his singing career began in the eighth grade when he started singing in the school quartet. The Lord gifted Bill with a beautiful bass voice at an early age, and he used this gift to praise his Lord and Savior until he was called home. Although he performed in concerts and on radio and television with many well-known gospel groups, his greatest joy came from singing with the Englewood Baptist Church choir. As an ordained Baptist minister pastoring in several churches in West Tennessee, Bill also had a passion for Jail Ministry and faithfully ministered to inmates for many years. Bill married his high school sweetheart, Avis Bowman, in 1956. Married for over 60 years, Bill and Avis lovingly raised their children in the Beech Bluff/East Union community. Bill was preceded in death by his parents, William H. Stewart, Sr. and Katherine Kemp Stewart Jones; and two sisters, Peggy Cox and Betty Carver. He is survived by his wife, Avis, daughter Angela and son-in-law Robert (Bob) McKenzie, Jr.; and son, William H. (Bill) Stewart, III and daughter-in-law, Melinda; four grandchildren, Robert McKenzie III, Adrienne McKenzie, Sarah Stewart Cronin (Ryan), and Clayton Stewart; and two great-grandchildren, Stella and McKenzie Blackwell and a special cousin with whom he was raised, Jimmie Cagle. Pallbearers to serve will be grandsons, Robert McKenzie III, and Clayton Stewart; nephews, Malcolm Richardson and Ted Welch; and dear friends, John Cole and Dan Morris. SERVICES: Funeral services will be handled by Arrington Funeral Home with visitation at the funeral home on Saturday, April 8, from 5:00-7:00 p.m., and funeral services at Englewood Baptist Church at 2:00 pm. on Sunday, April 9. Burial will be at Ridgecrest Cemetery. Memorials for Bill Stewart may be made to the Worship, Children’s, or Jail Ministries of Englewood Baptist Church. Arrington Funeral Directors, 148 W. University Parkway 668-1111 www.arringtonfuneralgroup.com

The family of William H. "Bill" Stewart created this Life Tributes page to make it easy to share your memories.