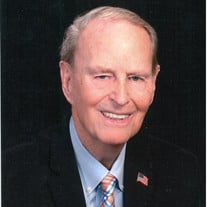 William Lynn "Bill" Bailey, age 89, passed away peacefully at Jackson General Hospital, surrounded by family and friends, on Sunday afternoon, August 25th, 2019, after a brief illness. Bill was a long-time resident of the Mercer, TN, community, graduating from high school as the Salutatorian of his class. He attended Union University where he became a member of the Alpha Tau Omega fraternity, and transferred to American University in Washington, DC, to complete his undergraduate degree. While earning his Juris Doctor degree from George Washington University, he was joined in Washington by his high school sweetheart and new wife, Mona Pulliam Bailey. Bill was then appointed a Special Agent of the Federal Bureau of Investigation (FBI), and finished sixteen weeks of arduous training at the FBI Academy in Quantico, VA. During his career with the FBI, Bill was transferred around the country fourteen times, serving in many localities. His early career in Chicago, IL, was spent focusing on investigating organized crime and bank robbery. He then became an Assistant Special Agent in Charge of the Louisville, KY, and then Newark, NJ, field offices. He was promoted to senior management at FBI Headquarters in Washington, DC, and served as Inspector/Executive Assistant to the 2nd in command of the FBI, Associate Director Jim Adams. Bill was then appointed an Assistant Director himself and served in that capacity until his retirement in 1980. He is credited with managing a workforce of over 3,000 employees and leading the FBI's Record Management Division to computerize its operations for the first time. After retirement from the FBI, Bill accepted a position as Corporate Security Director for the Fortune 500 company Champion International Paper Corporation (now International Paper), retiring from there in 1996. After his retirement, Bill served as an active member of his church community at Northside United Methodist Church. He volunteered in the Jackson community, and best enjoyed his work with adult literacy and business education. Early in Bill's life he joined the Fraternal Order of Masons and was able in his final years to re-engage with them at Jackson's St. John's Lodge #332. He was a devoted Christian man and gave much of himself to friends and extended family. He will be greatly missed. Bill was preceded in death by his beloved wife of 63 years, Mona Pulliam Bailey, and his son, Gregory William Bailey. His son Robert Lynn Bailey lives in Truro, MA, with his wife Breon Dunigan. Their son, Liam Bailey, Bill's grandson, lives in Philadelphia, PA. Bill and Mona raised their granddaughter, Anastasia Bailey Kidd, as their own daughter, and she lives in Boston, MA, with her husband Chad Kidd. Bill's funeral will be held on Friday, August 30th, at Arrington Funeral Directors, with Dr. Don Thrasher officiating. Visitation will take place from 12 - 2pm, and his service will begin at 2pm. He will be interred next to his wife at Highland Memorial Gardens. In lieu of flowers, memorials can be made to either Northside United Methodist Church, 2571 N. Highland Ave., Jackson, TN 38305 or the Jackson-Madison County Humane Society, 23 Pinnacle Drive, Jackson, TN 38305. Arrington Funeral Directors, 148 W. University Parkway, 668-1111 www.arringtonfuneralgroup.com

The family of William Lynn "Bill" Bailey created this Life Tributes page to make it easy to share your memories.