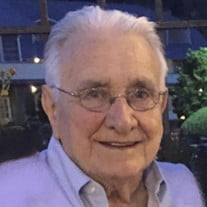 Willard Ray Stegall, age 85, peacefully passed away in the comforts and company of his adoring family on Thursday, September 16, 2021. Willard Ray Stegall was born on Tuesday, October 1, 1935, to William H. and Lucy (Hale) Stegall, one of 6 children. Other than his parents, Willard is preceded in death by his brother, William H. Stegall, Jr. Willard met and married the love of his life, Brenda Sue Reeves, on June 28, 1958 and enjoyed many years of blissful marriage. Willard held his birth name until he and Sue completed their family with the addition of 3 children, at which time he proudly answered to the given name of “Daddy”. With the determination of a lion and the demeanor of a lamb, Willard was a friend to all who had the pleasure of knowing him. He became a successful business owner in Jackson, TN when he began Stegall Tire in 1983. His unwavering work ethic and desire to help others kept his business, that is still thriving, prospering. Even after retirement Willard relished every opportunity to visit the tire shop and talk with those working, the customers, and especially those who stopped by for a visit in their spare time. He was a smart man who loved to read, listen to old country, watch old westerns, ride around, and a good day’s work. But his most enjoyable moments were found telling long stories and short jokes. He had a colorful imagination and a laugh that would fill any room. Willard was a Veteran of the United States Army and received his honorable discharge on June 30, 1964. He loved the Lord and attended the Seventh Day Adventist Church when his health allowed. He is survived by his devoted wife, Brenda Sue Stegall; son, Jimmy Stegall and wife Joni; daughters, Pamela Fesmire and husband Mike, and Angie Doyle and husband Tommy, all of Jackson, TN; three grandchildren, Alaina Amon and husband Kaleb, Britni Stegall, and Dustin Cupples; two great-grandchildren, Lyric Stegall and Ella Amon; brothers, O.V. Stegall and J.W. Stegall; sisters, Glenda Bell and husband Joe, and Judy Newcomb; as well as many other family, friends and neighbors who mourn his passing. There will be a Graveside Service on Sunday, September 19, 2021, at 2:00 p.m. at Independence Cemetery with Rev. John Baker officiating. Military Honors will be presented by the Vietnam Veterans of America Honor Guard Services. Pallbearers serving are Bobby Gobelet, Dustin Cupples, Hunter Mathis, Kaleb Amon, Mike Fesmire, and Todd Wilson with Jimmy Stegall serving as alternate. The family is requesting memorial donations be directed to the Wounded Warrior Project- Donor Care Center, P.O. Box 758541, Topeka, KS 66675 Arrington Funeral Directors 148 W. University Parkway Jackson, TN 38305 731-668-1111

Willard Ray Stegall, age 85, peacefully passed away in the comforts and company of his adoring family on Thursday, September 16, 2021. Willard Ray Stegall was born on Tuesday, October 1, 1935, to William H. and Lucy (Hale) Stegall, one of 6... View Obituary & Service Information

The family of Willard Ray Stegall created this Life Tributes page to make it easy to share your memories.

Willard Ray Stegall, age 85, peacefully passed away in the comforts...