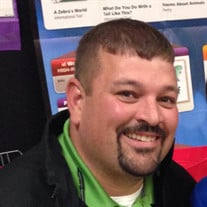 William “Will” Brien Pevahouse, 42, died Saturday, July 1, 2017. He was born October 11, 1974 in Jackson, TN the son of Jeff and Wanda Pevahouse. He was a pilot for Dement Construction Company. He served his country faithfully in the Marine Corps prior to completing flight school in Norman, Oklahoma. Will had a natural ability and was proficient at most anything he set his mind to accomplish. He was an exceptional aviator with natural instincts and an excellent marksman. He enjoyed golfing and riding dirt bikes with his boys. He never became involved in any hobby in which he could not include his two boys. His family was what brought him his greatest pleasure. He had an infectious smile that could light up any room and will be missed by many. Will was an amazing husband, father and friend. Will is survived by his wife Wendy Pevahouse, his two sons, Dalton and Gavin, all of Humboldt, TN, parents Wanda and Jeff Pevahouse, of Jackson, TN, brother Dustin Pevahouse of Jackson, TN, mother in law Beverly Herron and husband Martin of Ripley, TN, father in law Eddie Joe Burks of Maury City, TN, grandfather Robert “Bobby” Brien, Sr of Jackson, TN, and uncle Robert G. “Buddy” Brien, Jr. SERVICES: Funeral services will be held Friday, July 7, 2017 at 2:00PM at Antioch Baptist Church with Dr. Bill Espy officiating. Burial will follow at White Rose Cemetery in Gibson with Military Honors. The family will be receiving friends Thursday, July 6, 2017 from 4:00PM until 6:00PM at Arrington Funeral Directors. Those serving as pallbearers will be Jeff Mansfield, Britt Roshon, Kevin Brogdon, Patrick Moody, Rhett Perry and Julian Wiser. Arrington Funeral Directors, 148 W. University Parkway, Jackson, TN 38305. 731.668.1111 www.arringtonfuneralgroup.com

William &#8220;Will&#8221; Brien Pevahouse, 42, died Saturday, July 1, 2017. He was born October 11, 1974 in Jackson, TN the son of Jeff and Wanda Pevahouse. He was a pilot for Dement Construction Company. He served his country faithfully... View Obituary & Service Information

The family of Will Brien Pevahouse created this Life Tributes page to make it easy to share your memories.