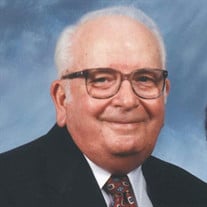 Wayne T. Perry, age 86, passed away on April 20, 2016 at the Jackson Madison County General Hospital after a few months of declining health. Wayne Tomlin Perry was the youngest and last survivor of six children born to James Washington (J.W.) and Sarah Lillian Tomlin Perry. He was born in Madison County, TN on May 5, 1929 and lived almost all of his life in Jackson, TN. He attended J.B. Young School and served in the U.S. Army during the Korean Conflict from 1951 until discharge in 1953 having been stationed at Camp Carson, Colorado. As a teenager during World War II, Wayne served in the Tennessee State Guard while the National Guard was activated. In the Madison Hall Community, Wayne and his three brothers were referred to as the “Perry Boys”. Wayne married Dorothy Sue Wood of Milan, TN on December 22, 1956. From this union, one child was born, Cynthia Leigh (Cindy). Mr. and Mrs. Perry joined the new Calvary Cumberland Presbyterian Church around 1960 and had the distinction of having had Calvary’s first new baby when Cindy was born. Wayne served as a deacon at Calvary. Later in 1967, they joined First Cumberland Presbyterian Church of Jackson. Wayne also became a member in 1967 of the Bill Baxter Bible Class that met and broadcasted for many years in the old City Hall in downtown Jackson. He attended for over 40 years until the class disbanded. He served as Secretary/Treasurer for most of those years and was the last survivor of the original group of attendees. He spent many years active in annual reunions with the group of Army buddies that were inducted in the army together in 1951. In the early years, Wayne worked at the Bemis Cotton Mill, worked in the Bemis Café, spent a short time working for General Motors in Michigan and later drove a truck for L. Dalton Meat Co. With the encouragement of his future brother-in-law and Life of Georgia employee, Perry L. Moss, Wayne began a work career with Life of Georgia Insurance Company in 1955 and retired in 1994. He worked in the Jackson, TN office from 1955 until 1964 and was transferred to Memphis, TN in 1964 until he chose to return to his hometown in 1966. During these years with Life of Georgia, he served as an Agent and Sales Manager and completed LUTC training. Having been a country boy, farming was always of interest to Wayne, and he spent his days off enjoying the family farm. Interests over the years also included planting vegetable gardens, building things, fixing things, helping people and going to any good coffee shop to meet his friends. After retirement, he enjoyed several part-time jobs which involved driving autos and trucks. Wayne drove a truck for a contract carrier for the Postal Service, drove Ryder Rental trucks, drove autos for the late Ricky Taylor who was an auto wholesaler, drove autos for several of the Jackson, TN automotive sellers and finally in recent years had worked for Serra Chevrolet driving, training and dispatching other drivers. Wayne was only age 23 in 1952 when his father suddenly passed away, and he later lost his mother in 1974. Mr. Perry was also predeceased by his brothers, James Garland (late Maude) Perry, James Cecil Perry, Sr. and Walter “Dennis” (late Lydia) Perry and his sisters, Ruby E. Perry (late Arliss) Vantreese (late Robert) Wood and Gladys J. Perry (late Orman, Sr.) Bowers and brothers and sisters-in-laws, Ann and Don Lawrence, Bernice and Elaine Wood, Robert Wood, Bennie and Margie Wood and Perry L. Moss. Additionally, he was predeceased by nephews, Orman Franklin Bowers, Jr., Gary F. Bowers, James Karl Perry, and Stephen Ray Wood and by nieces, Mary Dale Bowers, Mary Wood Davis and Elizabeth Ann Wood and his beloved feline companion of 17 years, Buddy. Survivors include his wife of over 59 years, Dorothy Sue Wood Perry, his daughter, Cindy Perry Deaton; his future son-in-law, Dale Warren; his sisters-in-law, Jean Warren Perry and Hettie Wood Moss. He is also survived by several nieces and nephews including Nancy Perry Wamble, Patricia Perry Thomason, Judy Perry Smith, Jean Vantreese McKenzie, Virginia Ann Vantreese Morris, James Cecil Perry, Jr., Donna Perry Gerhardt, Kay Perry Whitt, Don Harold Lawrence, Cecilia Wood Snuffer, Robert L. Wood, Jr., Michael E. Wood, Camille Moss Key, John Wayne Moss, Becky Wood Roberts, David Wood, Tim Wood, Philip Wood and all of their families. He also leaves several cousins, many good friends, co-workers and feline companion, Jake. SERVICES: A funeral service will be held at 3:00 PM Saturday, April 23, 2016 in the chapel of Arrington Funeral Directors with nephew, Don Harold Lawrence and cousin, Matt Tomlin officiating. Burial will follow in Highland Memorial Gardens, where two of Wayne’s brothers and several other family members are interred. The family will be receiving friends on Friday, April 22, 2016 from 5:00 PM until 7:00 PM at Arrington Funeral Directors. Pallbearers for the service will be David Wood, Tim Wood, Philip Wood, John Wayne Moss, James Cecil Perry, Jr. and Jerry Culpepper. Honorary pallbearers will be Robert Sessions and the management and staff of Serra Chevrolet of Jackson, TN. The family is requesting that memorial contributions be directed to the charity of the donor’s choice. Arrington Funeral Directors, 148 W. University Parkway, 668-1111 www.arringtonfuneralgroup.com

The family of Wayne T. Perry created this Life Tributes page to make it easy to share your memories.