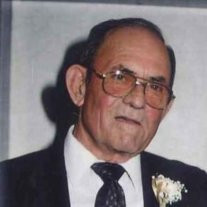 Wayne Wesley Albright, 86, died on Saturday, May 18, 2013 at the West Tennessee State Veterans Home in Humboldt, TN. A native of Tyrone, OK, Wayne was born on April 29, 1927, the son of the late Ancel Alfred and Elsie Elane Stevens Albright. He was married to the late Lina Gale Albright, who was his best friend, fishing partner and traveling companion for many years. He proudly served in the United States Navy on the USS LST 741 in the Philippines during WWII. After his military service he began his career with the Oklahoma Gas Pipeline Company which continued for 42 years, retiring in 1992 with the Santa Fe Minerals Company. Along with his professional career Mr. Albright was a farmer and cattleman for most of his life, working the fields at daybreak and again until sunset. He also served on the Tyrone, OK school board, was president of the Tyrone City Cemetery Committee from 1990 – 2002, he was a former scout master, little league coach and a mentor to many youth throughout his life. He was known as the best shotgun hunter in the region for many years. He was a member of the Tyrone Lions Club and the Tyrone Church of Christ. He is survived by his son, Steve Albright and wife Janice of Jackson, TN; a daughter, Pam Olney and husband Zack of Glen Burnie, MD; two nieces Peggy Greb of Lone, OK and Beverly Kilgore of Liberal, KS; four grandchildren, Kevan Albright and wife Sharon, Tanner Albright, Matthew Olney and wife Susan and Michael Olney and four great grandchildren, Zachariah Olney, Ryan Olney, Merit Albright and August Albright. He was preceded in death by a brother, Basel Albright and a sister, Rhomance Southern. The family is requesting that memorial contributions be directed to the Cal Farley’s Boys Ranch P.O. Box 1890, Amarillo, TX 79174-0001 or to the Tyrone Cemetery Association. SERVICES: Visitation with the family will be Wednesday, May 22, 2013 between 5:00PM – 7:00PM. Funeral service will be Thursday, May 23, 2013 at 3:00 PM at North Jackson Church of Christ with David Powell, minister officiating. Burial will follow in Highland Memorial Gardens. Pallbearers will be Larry Dees, Matthew Olney, Michael Olney, Zack Olney. Richard Pelton and Tanner Albright. Arrington Funeral Directors, 148 W. University Parkway, Jackson, TN 731/668-1111, www.arringtonfuneralgroup.com

Wayne Wesley Albright, 86, died on Saturday, May 18, 2013 at the West Tennessee State Veterans Home in Humboldt, TN. A native of Tyrone, OK, Wayne was born on April 29, 1927, the son of the late Ancel Alfred and Elsie Elane Stevens Albright.... View Obituary & Service Information

The family of Wayne W. Albright created this Life Tributes page to make it easy to share your memories.