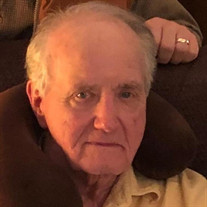 Dr. Walter L. Nelms, Sr., age 89, died peacefully on April 19, 2022, at his home in Jackson, TN surrounded by his family. He was born in Memphis, TN on February 26, 1933, the son of the late Tip Cox Nelms and Eugenia Nabors Nelms. He proudly served his country in the United States Marine Corps. Dr. Nelms was retired from Jackson State Community College (“JSCC”), joining the college at its inception in 1967 as Academic Dean and serving there until his retirement in 1997, as President. He is survived by his wife of 69 years, Peggy Williams Nelms of Jackson, TN; three children, Brenda Phillips of Nashville, TN and her former husband Mike Phillips and wife Susan of Spring Hill, TN, Walter L. “Bubba” Nelms, Jr. and his wife Lynn of Germantown, TN, and Wm. Lee Nelms and his wife Tracy of Memphis, TN; his brother Dr. Tip Carroll Nelms of Little Rock, AR and his sister Joy Nelms of Jackson, TN; nine grandchildren, Logan Nelms, Hannah Nelms, Landon Nelms, Walter “Louis” Nelms, III and wife Macy, Carter Nelms, Jackson Nelms and wife Kristie, Shaun Phillips and wife Jackie, Seth Phillips and Sam Phillips and wife Allie, and three great-grandchildren, Theodore Phillips, Emilia Phillips and Evelyn Phillips. Walter was an avid golfer and golfed, daily, for many years with men whose friendships he deeply valued. He loved them and his other friends from JSCC, his church and the community. He was a horseman and sports enthusiast who also enjoyed piloting small aircraft and riflery. He served on the Boards of Jackson Christian School and of Agape Child & Family Services for a number of years and as an elder at the Campbell Street Church of Christ for several decades. He donated faithfully to a variety of charitable organizations close to his heart. Walter was proud of his children, grandchildren and great-grandchildren and of all his “academic offspring” at JSCC, including graduates of the health science programs at JSCC, which he was instrumental in originating and developing. He deeply appreciated the graduates of those programs and other health care personnel in the community who cared for him and his health care needs, particularly during the last few years as his needs increased. He was grateful for the love of and daily connection with his friend James Williams. SERVICES: A memorial service will be held at 2:00 PM Sunday, April 24, 2022, at Campbell Street Church of Christ. The family will be receiving friends following the service at the church. Walter asked that anyone who wants to say something have an opportunity to do so at the service. If you would like to participate in the service that way, the family welcomes your celebration of his life with them. The family is requesting that, instead of flowers, memorial contributions be directed to the charity of the donor’s choice. Online condolences for the family can be made at www.arringtonfuneralgroup.com. Arrington Funeral Directors, 148 W. University Parkway, Jackson, TN 38305 731.668.1111 www.arringtonfuneralgroup.com Memorial contributions can be made here: https://joingenerous.com/arrington-memorial-dr-walter-l-nelms-sr-maiyhbx

Dr. Walter L. Nelms, Sr., age 89, died peacefully on April 19, 2022, at his home in Jackson, TN surrounded by his family. He was born in Memphis, TN on February 26, 1933, the son of the late Tip Cox Nelms and Eugenia Nabors Nelms. He proudly... View Obituary & Service Information

The family of Dr. Walter L. Nelms Sr. created this Life Tributes page to make it easy to share your memories.