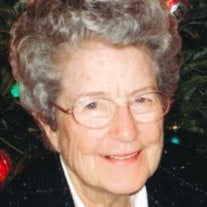 Virginia Leggett Dickinson, born October 9, 1927, passed away early Sunday morning, October 27, 2013. Mrs. Dickinson is survived by her husband of 64 years, John Glass Dickinson, Jr., daughter, DeeAnn Dickinson Ketcherside, son-in-law, John F. Ketcherside, and son, John Glass Dickinson III. She was pre ceded in death by her parents, Herman and Ruby Leggett of Halls, Tennessee; sister, Pauline (Winston) Carmack of Gates; sister, Maxine (Joseph) Moore of Texarkana; and sister Mary Alice Springer Hladky of Haywood County. She is survived by sisters, Becky Pittman, Peggy Billings and Shirley Wright, as well as numerous nieces and nephews, all of whom she loved dearly. Mrs. Dickinson was born in Memphis, the daughter of Herman and Ruby Leggett. She spent most of her childhood and early teen years in Lauderdale County in the Concord and Curve communities. She is an alumni of Union University in Jackson, Tennessee, and was a member of Zeta Tau Alpha sorority. Mrs. Dickinson was a teacher and taught children with learning disabilities for most of her career. When she moved to West Tennessee from Lake Charles, Louisiana, in 1981, she continued teaching in the area filing in as a substitute teacher where needed. She was a member of Woodland Baptist Church of Brownsville, Tennessee, where she was active in the Women’s Missionary Union and the church choir. Her life exemplified her belief in hard work, honesty, thrift and keeping one’s word. She had a steadfast faith in the Lordship of Christ in her life. The family would like to thank Tennessee Quality Hospice, Northbrooke Healthcare, and Elmcroft of Jackson for their kindness and compassion. Funeral services will be held on Tuesday, October 29, 2013, at 2:00 p.m. at Woodland Baptist Church, 885 Woodland Church Road, Brownsville, Tennessee, with Dr. Mike Moore officiating. In lieu of flowers, memorial contributions may be made to the Woodland Baptist Church Cemetery Fund, c/o LLene Barcroft, 995 Hubert Barcroft Road, Brownsville, TN 38012. Visitation will be held Monday, October 28, 2013, from 5:00 to 7:00 p.m. at Arrington Funeral Directors, 148 W. University Parkway, Jackson, TN and for one hour prior to the service on Tuesday, October 29th at Woodland Baptist Church.

The family of Virginia Leggett Dickinson created this Life Tributes page to make it easy to share your memories.