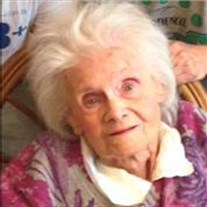 Velma Louise Arwood July 26, 1920 - November 24, 2016 Velma Louise Arwood went on to be with the Lord at the age of 96 on Thanksgiving Day. She was born in Attala County, Mississippi on July 26, 1920, the daughter of Walter McBride and Rose Holley McBride. After living in Mississippi, Arkansas, and Kansas, she had made her home in Jackson, Tennessee since 1955. Velma was a faithful wife and loving mother, grandmother, and great grandmother. She was preceded in death by her husband, Joe Turner Arwood, in 2004. Velma was a homemaker and was a wonderful mother to her children, Patricia Wimsatt (Richard) who survives her, and Stephen Arwood who preceded her in death in 1985. She is also survived by three grandchildren, Bobby Parker (Chelsea) of Nashville, Tennessee, and Karen Chapman (Brandon), and Jessica Arwood of Jackson. One of her granddaughters, Stephanie Arwood, preceded her in death. Velma had five great grandchildren, Ford Parker, Baker Rhodes, Elizabeth Vales, Clayton Vales, and Keeton Vales. As an adult, Velma trusted Christ as her Lord and Savior and went on to teach Sunday School and Bible School classes for children. When she was physically able, she last attended Highland Park Baptist Church where she was a member. Velma was an avid reader and loved to work crossword puzzles. She enjoyed cooking for her family and was an excellent cook with a special love for desserts. Her pastimes of quilting, crocheting, and embroidery occupied much of her time. She will be greatly missed by her family and remembered for her quick wit, her sharp mind, and her loving and caring spirit. A graveside service will be held Sunday at Ridgecrest Cemetery at 12:30 p.m. The family has requested that memorial contributions may be directed to Mothers Against Drunk Driving, 546 E. College Street, Jackson, TN 38301. Arrington Funeral Directors, 148 W. University Parkway, is in charge of the arrangements 731.668.1111.

The family of Velma Louise Arwood created this Life Tributes page to make it easy to share your memories.