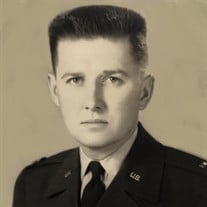 LTC (R) USAF Robert L. Brand, age 99, died at Jackson-Madison County General Hospital after a brief illness. A native of New York City, NY, Lt. Colonel Brand was born on July 7, 1922, the son of Edmund and Julia Vigh Brand. He married Vivian Chamberlain Brand who preceded him in death in 2001. He was the recipient of numerous awards and accolades during his twenty-four year career with the United States Air Force serving in all four eras including World War II, Korea, Vietnam, and the Cold War, during which he flew a strategic bomber. After retiring from the Air Force in 1966, he began a career with Rockwell International that brought him and his family to West Tennessee, where he retired. Robert had a love and zest for life and was blessed by a fulfilling military and private sector careers. He was a member of the Mid-South Live Steamers, located in Columbia, TN, an organization that builds and features railroad tracks where 1/8 scale steam locomotives pull guest on miniature train cars. He was also a member of the Masonic Lodge. He is survived by his daughters, Janet Cooper-Weatherly of Congers, NY, Jennifer Brand of Jackson, TN, and Robin Brand of Fountain Hills, AZ; six grandchildren, Courtney, Sarah, Kathryn, Erin, Greg, and Jeff; and nine great grandchildren, Nicolas, Avery, Jonathan, Charlie, Henry Devon, Victoria, Jack, and Erin. He was preceded in death by two brothers, Walter and Raymond Brand. SERVICES: A funeral service will be held at 1:00 PM Wednesday, November 3, 2021, in the chapel of Arrington Funeral Directors, with Rev. David Stamile officiating. Burial will follow in Highland Memorial Gardens with military honors. The family will be receiving friends on Wednesday, November 3, 2021, from 11:00 AM until 1:00 PM prior to the service. The Brand family request that memorial contributions be directed to Guiding Eyes for the Blind, 611 Granite Springs Road, Yorktown Heights, NY 10598, Mid-South Live Steamers, 1087 Canaan Road, Columbia, TN 38401 or to the Disabled American Veterans, 2998 N. Highland Ave., Jackson, TN 38305.

The family of LTC (R) USAF Robert Louis Brand created this Life Tributes page to make it easy to share your memories.