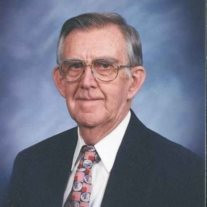 Troy Allen Smith, Sr, 86, died on Friday, January 24, 2014 at the Jackson Madison County General Hospital. Troy was born in Hardin County, TN on June 11, 1927, the son of the late Arnold and Ida Newman Smith. He served in the United States Army during WWII returning home to graduate from West Tennessee Business College. Troy had been associated with the auto industry in the area for fifty years. He began his career with Dick Clippard Auto, Les Reinke Buick, Golden Circle Ford all of Jackson, was co-owner of Brownsville Ford Lincoln-Mercury before working with Dwain-Seaton Ford in Henderson and Old Country Auto of Jackson. He was a member of First Baptist Church of Jackson for fifty-six years. He was also a member of the Jackson Civitan Club and the Knights of Pythias. He is survived by his wife of fifty-six years, Mary Steed Smith of Jackson: a daughter, Ida Marie Smith of Rochester, MN; two sons, Troy Allen Smith, Jr and wife Dorinda of Allen, TX and James A. Smith and wife Toni of Marietta, GA; three grandchildren, Wade Smith, Riley Smith and Pierson Smith and a sister, Clara Sue Stanfill and husband Joe Raymon of Luray, TN. He was preceded in death by a brother and a sister. SERVICES: A funeral service will be held at 11:00 AM Tuesday, January 28, 2014 in the chapel of Arrington Funeral Directors with Dr. Jerry Drace, Rev. Justin Wainscott and Rev. Mike Sellers officiating. Burial will follow in Ridgecrest Cemetery. The family will be receiving friends on Monday, January 27, 2014 from 4:00 PM until 7:00 PM and on Tuesday, January 28, 2014 from 9:30 AM until service time. Memorial donations are to be directed to the Alzheimer’s Association, 713 S. Mendenhall Road, Memphis, TN 38117. Arrington Funeral Directors 148 W. University Parkway 668-1111 www.arringtonfuneralgroup.com

The family of Troy Allen Smith Sr created this Life Tributes page to make it easy to share your memories.