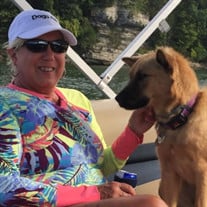 Tommie Neal Whitten Freeman of Franklin, TN was born on February 9, 1959 in Bolivar, TN. She departed this life on August 15, 2019. She was preceded in death by her mother, Priscilla Grantham, and her father, Crump O’Neal Whitten. She is survived by her husband of 22 years, Mark Lee Freeman, her children, Ronnie Neal Atkinson and wife Hope, Casey Freeman and wife Heather, Travis Freeman and wife Crystal, a brother, Timmy Whitten, sister-in-law, Jennie Marbry, and niece Toni Whitten. She is survived by 6 grandchildren, Elizabeth, Elyse, Blake, Lauren, Connor, and Addison. She is also survived by a great niece, Gracyn. Ever a lifetime learner, she began her career as a nurse in 1980, completed her Bachelors of Science in Nursing in 1988, completed her Masters of Science in Nursing in 2006, and became a Certified Advanced Practice Nurse in 2007. She worked in mental healthcare from 1980 to 1994. In 1994, she began working for Procter and Gamble as a nurse manager at the Pringles Plant in Jackson, TN. She advanced into a Quality management role at the Pringles Plant in Mechelen Belgium. She later moved into a Global Quality role with P&G upon return to the United States. In 2015 she progressed into another Quality role when Mars Inc. acquired the lams brand from P&G. In 2018 she transitioned into another a quality role with Red Collar Pet Foods when Mars spun off a part of their pet care business. She retired in April 2019. Tommie loved life, her grandchildren and especially planning time to be with them. She enjoyed concerts at the Ryman Auditorium and the Tennessee River on her pontoon with family and friends. She had a passion for dogs. She loved travel and gourmet meals with friends. Her energy for life was never ending. Services to celebrate her life will be held at Arrington Funeral Directors, 148 W. University Parkway, Jackson, TN. Friends and extended family will be received beginning 5:30 p.m. on Saturday, August 24, 2019. In lieu of flowers, donations can be made in her name to the animal shelter of your choice. Arrington Funeral Directors, 148 W. University Parkway, 731-668-1111 www.arringtonfuneralgroup.com

Tommie Neal Whitten Freeman of Franklin, TN was born on February 9, 1959 in Bolivar, TN. She departed this life on August 15, 2019. She was preceded in death by her mother, Priscilla Grantham, and her father, Crump O&#8217;Neal Whitten. She... View Obituary & Service Information

The family of Tommie Neal Whitten Freeman created this Life Tributes page to make it easy to share your memories.