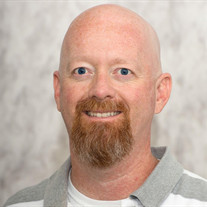 Tim Burruss, age 43, died on Monday, January 29, 2018 at his Jackson residence. Tim was born in Jackson, TN on May 1, 1974, the son of Bettye Hendrix Burruss and the late Harold Wayne Burruss. He was a graduate of University School of Jackson and Jackson State Community College becoming an EMT and Paramedic. He was a great educator, touching the lives of many as well as a Paramedic for Crocket County EMS and West Tennessee Healthcare. He had a passion for guns and was also employed with Range USA. He had just recently been approved as an AirEvac Paramedic, a desire that he had had for some time. He had a passion for reading and loved to travel with his family. Family came first for Tim and that included his two Belgium Malinois dogs, Bella and Niko. Tim was the recipient of a kidney in 2005 from a very special person, Amanda McFarland Lewis, who will forever be the hearts of the Burruss family. He was a member of East Union Baptist Church. He is survived by his wife and best friend, Michelle Warren Burruss; a step-son and buddy, Allen Patterson; his mother, Bettye Hendrix Burruss; his mother-in-law and father-in-law, Russell and Pat Robertson Warren; a brother-in-law, Rusty Warren and special friend Lori all of Jackson, TN; a sister, Kim Burruss Hall and husband George and their daughter Kristen Hall of Beech Bluff, TN and numerous loving aunts, uncles and cousins. A special thank you to Billy Prescott for being his EMS partner and “brother” and always having his back for many Years. SERVICES: A funeral service will be held at 2:00 PM Thursday, February 1, 2018 at East Union Baptist Church with Dr. Edgar Pierce officiating. Burial will follow in Beech Bluff Cemetery. The family will be receiving friends on Wednesday, January 31, 2018 from 5:00 PM until 8:00 PM at Arrington Funeral Directors and on Thursday, February 1, 2018 from 12:00 PM until 2:00 PM at East Union Baptist Church prior to the service. The family is requesting that donations be directed to Tennessee Donor Services, 1600 Hayes Street, Suite 300, Nashville, TN 37203 or to the Breast Cancer Awareness Fund with the West Tennessee Healthcare Foundation, 620 Skyline Drive, Jackson, TN 38305. Arrington Funeral Directors, 148 W. University Parkway 668-1111 www.arringtonfuneralgroup.com

Tim Burruss, age 43, died on Monday, January 29, 2018 at his Jackson residence. Tim was born in Jackson, TN on May 1, 1974, the son of Bettye Hendrix Burruss and the late Harold Wayne Burruss. He was a graduate of University School of Jackson... View Obituary & Service Information

The family of Tim Burruss created this Life Tributes page to make it easy to share your memories.