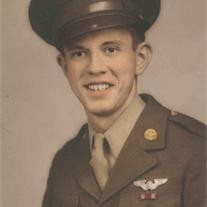 Mr. Dixon Corum passed away on May 11, 2012 at the Jackson Madison County General Hospital after a short illness. Services for Mr. Corum will be held Monday, May 14, 2012 at 2:00 PM in the chapel of Arrington Funeral Directors, with Dr. Don Thrasher officiating. Burial will follow with Military honors at Highland Memorial Gardens. The family will be receiving friends on Sunday, May 13, 2012 from 4:00 PM until 6:00 PM at Arrington Funeral Directors.Mr. Corum was one of the ?Greatest Generation?. He was born in Union City, TN on July 19, 1923. With the death of his father, he was forced to drop out of school before completing the 7th grade. To support his family, he became an apprentice in a woodworking shop. Later in his life, he was to use the skills he acquired in this shop to build beautiful antique reproduction furniture.With the outbreak of World War II, and with his mother?s blessings, at the age of 19, Mr. Corum avoided the draft and enlisted in the Army Air Corps. He flew and was a gunner on a B17 bomber. His plane was shot down over Northern Italy and he became a prisoner of war. During the fourteen months as a prisoner, he was forced to walk, ride in cattle cars, and travel by boat, throughout Europe, as the Allied forces penetrated Germany. The danger of being bombed by Allied forces and the unbelievable hardships inflicted on him by his captors, was not known to his family until the last few months of his life.After returning from the war, Mr. Corum became a Boy Scout Master and attended the University of Tennessee at Martin and Knoxville, earning undergraduate and graduate degrees. In Knoxville, he met and married the love of his life, Kathleen Young, and began working for the State Department of Education. He was instrumental in helping to develop and oversee the programs used to teach the handicapped school children in the State of Tennessee today. In fact, he taught the first Special Education course at Memphis State University in 1952.Mr. Corum also utilized his teaching expertise later in life when he helped teach Sunday school classes for special needs children at Lambuth Memorial United Methodist Church in Jackson, TN.With his loving wife, he raised three children who have continually tried to live up to his example.Mr. Corum was a pioneer, just as his ancestors who entered Tennessee before it became the State of Tennessee. He has been and is loved by many and will be missed by all who knew him.He was preceded in death by his father Charles Hunter, his mother Lucille, his brothers Charles Taylor Corum and Robert Lewis Corum, as well as his daughter Janet Elaine Fletcher.He leaved behind his wife, Kathleen Young Corum of Jackson, TN; sons, Tilman Dixon Corum, Jr. (Phoebe) of Jackson, TN and David Lloyd Corum (Susan) of Kennett Square, PA; seven grandchildren, Charles Corum, Sara Tate (Craig), Jennifer Markham (Mack), Lori Sharp (Eric), Samuel Corum, Benjamin Corum, and Thomas Corum and six great grandchildren, Mack Markham, Jr., Emilee Markham, Brady Markham, Ella Sharp, Eli Sharp and Cooper Tate.Arrington Funeral Directors, 148 W. University Parkway 731/668-1111 www.arringtonfuneralgroup.com

Mr. Dixon Corum passed away on May 11, 2012 at the Jackson Madison County General Hospital after a short illness. Services for Mr. Corum will be held Monday, May 14, 2012 at 2:00 PM in the chapel of Arrington Funeral Directors, with Dr. Don... View Obituary & Service Information

The family of Tilman Corum created this Life Tributes page to make it easy to share your memories.