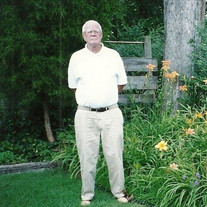 Thomas "Tommy" M. Geyer, age 86, died on Thursday, February 4, 2016 at the Jackson Madison County General Hospital. Tommy was born in Jackson, TN, the son of the late Thomas M and Vivian Hollis Geyer. He graduated from Jackson High School, where he played football under Coach Oman. Tommy was a very good athlete. He played City Tennis and also played Little League ball for Carroll Typewriter where he was the catcher and Billy Joe Winslow was the pitcher. After graduation, he joined the Air Force. He was in communication station at Fort Myers, VA. He worked in the Pentagon, which was where he met his wife Dixie. He was sent to Thule AFB in Greenland for a year, returning to DC where he got married. He and Dixie were married at the chapel of Andrews AFB, Maryland, where Dixie was stationed. He was then sent to Warren AFB in Cheyenne, Wyoming and lived there until discharged. After he was discharged, he came home to Jackson. He worked for Illinois Central Railroad as a telegraph operator. He went to St. Louis, Missouri to Airlines school. After he graduated, he went to work in Baton Rouge, LA for Southern Airways. He moved around the South in several different cities: Clarksville, TN, Huntsville, AL, Muscle Shoals, AL then came home to Jackson as manager for Southern Airways at McKellar Airport. After that, he moved to Memphis as Freight Supervisor. He retired after 34 years from Northwest Airlines. After retirement he and Dixie moved home to Jackson. He was a member of the Jackson Country Club and enjoyed playing golf. He played golf as much as he could when it did not interfere with his work. When he lived in Memphis, he was a member of Wyndike Country Club. Tommy was a member of Calvary Baptist Church of Jackson all of his life. Tommy loved the Lord and his family with all his heart. He is survived by his wife, Dixie L. Geyer; his son, Shannon Geyer and his wife Crystal and a grandson, Ryan Geyer all of Jackson, TN. SERVICES: A funeral service will be held at 2:00 PM Saturday, February 6, 2016 in the chapel of Arrington Funeral Directors. Burial with military honors will follow in Highland Memorial Gardens. The family will be receiving friends on Saturday, February 6, 2016 from 12:00 PM until 2:00 PM at Arrington Funeral Directors. The family is requesting that memorial contributions be directed to Calvary Baptist Church, 119 Oil Well Road, Jackson, TN or to the charity of the donor’s choice.

The family of Thomas "Tommy" M. Geyer created this Life Tributes page to make it easy to share your memories.