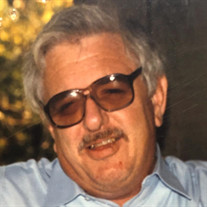 Thomas DeWitt Talmage, Sr., beloved husband, father, and grandfather, departed from this life on Tuesday, November 30, 2021, in the company of his adoring family. Born the son of the late Frank DeWitt and Sarah Jane (McCaskill) Talmage, on Friday, September 1, 1939, in Short Hills, NJ. Other than his parents he is preceded in death by his sister, Sarah Frances Wright. After graduating high school in Pensacola, Florida, Thomas joined the United States Army where he served 20 years before retirement. He was a decorated servicemember who loved his country. While serving his country abroad, Thomas met the love of his life, Jessica Wallis. He joined his beloved in marriage on June 6, 1960. They completed their family with the addition of their sons, Thomas DeWitt Talmage, Jr., and Charles Wallis Talmage. Thomas enjoyed every opportunity to travel with his family and especially treasured their travels to Europe where he was able to share the diversities of each location with those he loved most. Thomas loved everything about nature and all its beauty. His love for dogs began when he was a young boy. Because he was unable to have a pet as a young child, he was always a proud dog owner as an adult. A very enthusiastic man with a great love for many things, Thomas developed his own business after retirement from the United States Army. He was responsible for the largest single piece of equipment to ever cross the Atlantic Ocean. When Thomas’s health became compromised and he was unable to maintain his successful business, he began writing for several trade magazines to share his love and knowledge of the dockside container crane. He will be tremendously missed and never forgotten by his devoted wife of 61 years, Jessica Talmage; sons, Thomas DeWitt Talmage, Jr. and Charles Wallis Talmage; grandson, Thomas DeWitt, III, as well as many other family, friends and neighbors who will mourn his passing. Memorial Services will be held on Saturday, December 4, 2021, at 1:00 p.m. at Arrington Funeral Directors. Memorial contributions are suggested to the charity of your choice. Arrington Funeral Directors, 148 W. University Parkway, 731-668-1111 Jackson, TN 38305

Thomas DeWitt Talmage, Sr., beloved husband, father, and grandfather, departed from this life on Tuesday, November 30, 2021, in the company of his adoring family. Born the son of the late Frank DeWitt and Sarah Jane (McCaskill) Talmage, on... View Obituary & Service Information

The family of Thomas DeWitt Talmage Sr. created this Life Tributes page to make it easy to share your memories.