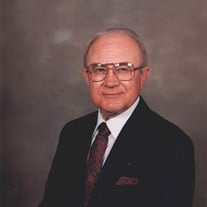 Rev. Thomas Doris Robinson, age 86, of Jackson, Tennessee, passed away on February 7, 2016 in Jackson, Tennessee. Funeral services for Rev. Robinson will be held at 1:00PM on Friday, February 12, 2016 at Englewood Baptist Church. Interment will follow at Maple Springs Cemetery in Madison County. Rev. Robinson is survived by his wife of almost 60 years, Peggy Bailey Robinson, of Jackson, Tennessee; daughter, Denise Robinson Bell and husband, Will Bell, of Jackson, Tennessee; son, Gregory Thomas Robinson and wife, Melanie Robinson of North Carolina; eight grandchildren: Courtney Taylor Robinson Mercado and husband, Jason Mercado, William C. Bell, III, Landon Thomas Robinson, Haley Alexis Robinson and finance, Bradley Wright, Bailey Andrews Bell, Parker Banks Bell, Palmer Robinson Bell, and Hayes Hamilton Bell. He is also survived by one great grandchild, Emma Taylor Mercado. Rev. Robinson was born at the family “homeplace” on Uptonville Road near Mercer, Tennessee to the late Lacy Alma Robinson and Clara Inez Upton Robinson Daniel. He had three siblings, Bonnie Cox of Toone, Tennessee, Lynn Daniel of Mercer, Tennessee, and Ray Robinson of Bartlett, Tennessee, who preceded him in death in 2006. He had 31 nieces, nephews, grandnieces, and grandnephews. He is also survived by a very dear brother-in-law and sister-in-law, Wilbur and Anne Bailey. Rev. Robinson was a Southern Baptist Minister and attended Union University. He became pastor of his first church while a student at Union University. He pastored seven churches in Tennessee and Arkansas, with his final church being First Baptist Church in Henderson, Tennessee. After his retirement in 1991, he served as an interim pastor for fifteen churches around West Tennessee. He loved serving his Lord. He always had a heart for visiting the sick and praying over them. Tirelessly, he visited his church members at home and in the hospital throughout his ministry. He touched countless lives with humility and grace during his ministry. Rev. Robinson at one time served as the President of the Chester County Ministerial Association. He was active in the associational work of the Madison-Chester Baptist Association, and he served on the Executive Board of the Tennessee Baptist Convention. It is requested that active and retired ministers sit as a group at the service. Visitation will be on Thursday, February 11, 2016 from 4:00 P.M. to 6:00 P.M. at Arrington Funeral Directors. Additionally, a visitation will be held on Friday, February 12, 2016 prior to the service from 11:30 A.M. to 1:00 P.M. at Englewood Baptist Church. The family has requested that memorial contributions be directed to Union University, 1050 Union University Drive, Jackson, TN 38305, Gideons International, P. O. Box 173, Jackson, TN 38302, or Alzheimer’s Association, 4825 Trousdale Dr, Suite 220, Nashville, TN 37220. Arrington Funeral Directors, 148 W. University Parkway, Jackson, TN 38305. 731.668.1111. www.arringtonfuneralgroup.com.

The family of Rev Thomas Doris Robinson created this Life Tributes page to make it easy to share your memories.