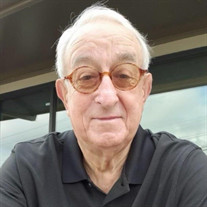 Tom F. Hay, age 77, died on Wednesday, September 15, 2021, at Jackson-Madison County General Hospital. A native of Trenton, TN, he was born on November 17, 1943, the son of the late Homer and Mildred Kilzer Hay. He was a graduate of the University of Tennessee at Martin as the first music education graduate. Tom’s career spanned a variety of occupations, including education as a teacher and band director, fund raiser, and tennis professional at the Jackson Country Club, where he directed his Junior Development Tennis Program. He was a competitive tennis player and was nationally and state ranked for several years. As a band director Tom was known for the exceptional jazz, concert, and marching bands at both Humboldt High School and Chester County High School in Henderson, TN. Tom also enjoyed playing the saxophone and clarinet at churches and other events. He also participated in the Senior Olympics for a number of years. Tom was a former member of Lambuth Memorial United Methodist Church, where he was active as a Sunday school teacher. He was a member of First United Methodist Church of Jackson. Tom is survived by his wife of forty-one years, Lisa Lewis Hay of Jackson, TN; his son Jason Hay and wife Kelly of Bryant, AR; his daughter, Lea Hay and husband Jacob Howard of Arlington, VA; his brother, Steve Hay and wife Becky of Trenton, TN; his sister, Linda Carol Moore of Jackson, TN and two grandchildren, Jackson and Spencer Hay. He is also survived by a host of nieces and nephews. Tom was a dog lover and over the years enjoyed the companionship of his fur babies-- Muggs, Puddin, and Princess and his current fur babies, Zoe and Sweetheart. SERVICES: A funeral service will be held on Tuesday, September 21, 2021, at 4:00 PM in the Sanctuary of First United Methodist Church, with Dr. Eddie Bromley officiating. Prior to the service the family will be receiving friends in Disciple Hall from 2:00 PM until 4:00 PM at the church. The family is requesting that memorial donations be directed to the Department of Music at the University of Tennessee at Martin, 16 Mt. Pelia Rd., Martin, TN 38238 or to the charity of the donor’s choice.

Tom F. Hay, age 77, died on Wednesday, September 15, 2021, at Jackson-Madison County General Hospital. A native of Trenton, TN, he was born on November 17, 1943, the son of the late Homer and Mildred Kilzer Hay. He was a graduate of the University... View Obituary & Service Information

The family of Thomas Franklin Hay created this Life Tributes page to make it easy to share your memories.