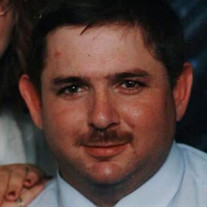 Terry Lynn Blackburn, 48, passed away Saturday, May 16, 2015 at Jackson Madison General Hospital. He was born May 8, 1967 in Jackson, TN the son of the late Thomas Edward Blackburn and Mary Lipford, who survives. Terry is survived by his mother... View Obituary & Service Information

The family of Terry Lynn Blackburn created this Life Tributes page to make it easy to share your memories.