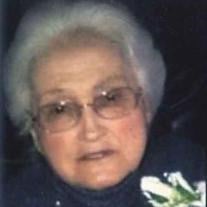 Sylvia Ray Wood Jackson A visitation and time for reflections for Sylvia Ray Wood Jackson, 90 will begin at 6:00 PM on Thursday, December 20, 2012 at Arrington Funeral Directors with the reflection service to follow at 7:00 PM with Rev. Ron Brown and Rev. David Wasmundt officiating. Mrs. Jackson died peacefully Tuesday morning at her daughter’s Jackson residence. She was born in Crossville, TN the daughter of the late Corbett and Maudie Bilbrey England. She was married to Charles Ray, Tom Wood and later Coy Jackson who preceded her in death. She was a retired facility maintenance employee for the school system in Kenosha, Wisconsin. In her younger years she was a member of a traveling quartet. She loved to play scrabble and was known for her cooking skills, especially her Chocolate Cakes and Chicken and Dumplins. For many years she taught Sunday school and was currently a member of Lighthouse United Pentecostal Church. She was a very patriotic person always paying tribute to her nation and her deceased husbands, who were veterans. She was a wonderful mother, grandmother and great grandmother. She is survived by her son, Charles Ray II and wife Lillian of Kenosha, WI; daughters, Barbara Rash of Jackson, TN and Georgia Wasmundt and husband David of Atlanta, GA; daughter in law, Dorothy Wood of Jackson, TN; brothers, Walter England and wife Earlene of Nashville, TN and Lewis England and wife Dixie of Sparta, TN; a sister, Rose Stoecker and husband George of Sparta; fourteen grandchildren and twenty-five great grandchildren. A time of visitation and reflection will also take place in Kenosha, WI on Sunday, December 23, 2012 at the Apostolic Faith Church from 6:00 PM until 8:00 PM with Rev. David Wasmundt and Rev. Mark Barnett officiating. Burial will follow on Monday, December 24, 2012 in Sunset Ridge Cemetery in Kenosha.

The family of Sylvia Ray Wood Jackson created this Life Tributes page to make it easy to share your memories.

Sylvia Ray Wood Jackson
A visitation and time for reflections...