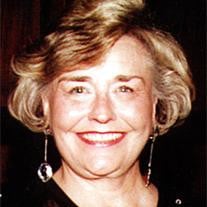 Sylvia Caldwell Hills, acclaimed business woman and fashion icon has died. Ms. Hills passed away on Friday, January 21, 2011 after a courageous battle with cancer. She was 84. Funeral services will be held Sunday, January 23, 2011 at 2:00PM from the sanctuary of the First Presbyterian Church with Reverend John White officiating. The family will receive friends following the service in Memorial Hall. A private family committal service will be held on Monday. Ms. Hills? positive influence in fashion will be remembered for generations to come. She opened Mam?selle Jackson in 1973 and was the sole owner and operator until the year 2000 when she sold the business. The Atlanta Apparel Mart selected her as buyer of the year in 1997 and awarded her the ?Excellence in Retailing? award in 2000. Born and raised in Humboldt, Tennessee, Ms Hills was the daughter of Benjamin Hubbard Caldwell and Thelma Jackson Caldwell, now deceased. She graduated from Stephens College, Columbia, Mo., in addition to Stephens, she attended Southwestern University (now Rhodes) in Memphis and Purdue University in Lafayette, Indiana. While at Purdue she traveled with the Al Stewart Glee Club and participated in numerous theatrical productions. In 1947, Ms Hills married Dr. Walter Jared Hills, III and moved to Memphis where she worked as a professional model in print and TV commercials, as well as runway modeling for Goldsmith?s Tearoom. In the early 50?s Ms Hills moved with her family to Jackson, where her husband Walter established a successful orthodontic practice. For nine years she taught at Union University where she developed a required curriculum in social adjustment. She was active in numerous civic, charitable, and social organizations, producing, directing, and singing in ?The Follies? for The Boys and Girls Clubs of Jackson. Many will remember her stint on ?The Price is Right? in the early 1960?s where she won a house in Florida. Ms. Hills was a member of the First Presbyterian Church in Jackson where she sang in the choir. Dr. Hills died in 1987 and in 1993 Ms. Hills married Harland Lee Smith, who survives. Daughter Suzanne Caldwell Hills preceded her in death in 1973 and her son Walter Jared Hills, IV died in 2005. In addition to her husband, survivors include her daughter Kimba Caldwell Hills and grandson, Jackson Caldwell Dill of Santa Monica, CA, grandson Walter Jared Hills, V, of Jackson, sister Suzanne Caldwell Labry of Humboldt and brother, Dr. Benjamin Hubbard Caldwell, Jr. and his wife Gertrude of Nashville and several nieces and nephews. The family has requested that in lieu of flowers that memorial contributions be directed to First Presbyterian Church, 1573 N. Highland Ave., Jackson, TN 38301, Hospice of West Tennessee, 1804 Highway 45 By-Pass, Suite 100, Jackson, TN 38305 or Sarah Cannon Research Institute, 3322 West End Avenue, Suite 900, Nashville, TN 37203.

Sylvia Caldwell Hills, acclaimed business woman and fashion icon has died. Ms. Hills passed away on Friday, January 21, 2011 after a courageous battle with cancer. She was 84. Funeral services will be held Sunday, January 23, 2011 at 2:00PM... View Obituary & Service Information

The family of Sylvia Hills created this Life Tributes page to make it easy to share your memories.