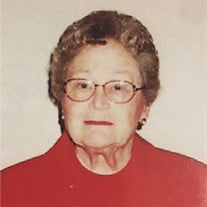 Syble Milam, age 91, passed on Wednesday, May 12, 2020 at West TN State Veterans Home after a long illness. She was born in Madison County, the eldest child of O.T. and Beulah Cavness Duke. Syble attended Spring Creek Elementary School and was a 1947 graduate of North Side High School where she lettered in basketball. After high school, she attended Union University. Prior to marrying her husband, Bruce Milam, on February 10, 1951, she worked as a switchboard operator for Bell Telephone in Jackson. After their marriage, she devoted herself to her family and community, working for a brief period at Sears. Her passion was supporting Browns United Methodist Church and the old Brown’s Elementary School. She served as the Chairperson of the Stew Committee, preparing the Brunswick stew that was sold from Brown’s booth at the West Tennessee State Fair. She worked in the Brown’s Church bazaars, attended the women’s Grace Circle and was a member of the Joe Spain Sunday School Class. At Brown’s Elementary, she served as a substitute teacher, supported the 4-H Club, Boy Scouts and Dixie Youth Baseball. Syble loved to sew, can, cook and garden. Syble was preceded in death by her husband, Bruce, sister, Freda, and her mother and father. She is survived by her three sons, Jerry (Charlene) Milam of Jackson, TN; Larry (Christy) Milam of Dallas, TX; and Gary Milam of Memphis, TN; four grandchildren: Melissa, Ben, Angela and Matt, and one great grandchild; Lily. She is also survived by her brother, Paul (Margie) Duke of St. Louis, MO. In lieu of flowers, Memorial Contributions may be made to Brown’s United Methodist Church. SERVICES: A graveside service will be held on Thursday, May 14, 2020 at 3:30pm, at Browns Cemetery with Bro. Steve Douglas officiating. Family has requested due to Covid- 19, all who attend to practice social distancing guidelines. Arrington Funeral Directors, 148 W. University Parkway, 731-668-1111 www.arringtonfuneralgroup.com

The family of Syble Milam created this Life Tributes page to make it easy to share your memories.