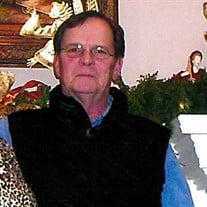 The family of Stan Cotner said their final earthly goodbyes on November 27, 2017. He was surrounded by family and was loved tremendously by all who knew him. He was born on April 8, 1950 to the late Harvey and Tommie Sowell Cotner. He was the youngest of eight children. He was preceded in death by Jimmy Cotner, Christine LaPorte (Art), Mary Helen Recker (Harry), Charles Cotner, Billy Cotner, Hal and Frances Scammerhorn Cummings. And nieces and nephews Tim Recker, David LaPorte, Mike Cotner, Pam Cotner, Trey Cummings, Wil Cummings and his brother in law Doug Lonon. He leaves behind his wife of forty-three years, Laura Cummings Cotner. They shared the joy of raising three beautiful girls along with their eight grandchildren who were their absolute pride. Angie Cotner Terry (Donald) Zack, Hallie and Chance, Amy Cotner Hurst (Brad) Tyler and Camdyn, and Allison Cotner Smith (Brent) Makeller, Keaton and Griffin. This family shares a strong immovable bond along with the assurance that we will meet again. He is also survived by Ann Cotner, Juanita Cotner, Douglas Cotner, Larry Cotner (Donna), William (Dicky) and Shelia Cummings and Susie Cummings Lonon and many nieces and nephews. He was a member of Englewood Baptist Church. He gave his life to Christ on November 2, 1975. He loved going to church and loved being a member of Tom Mapes’ Sunday school class. He was always a fan of Southern gospel music. He was previously a member of Woodland Baptist Church for over thirty years under Bro. Bob Ervin. He created a lifetime of memories with his friends and family. He loved to travel and spend time at the mountains and ocean. He enjoyed photographing the splendor of God’s creation. He loved to go fishing with his grandchildren. He was happiest when he was with his girls. His bond with his daughters is something that cannot be explained but only felt and seen. Stan was a 1968 graduate of North Side High School. He attended Jackson State Community College and Jackson Area Vocational-Technology School. He was employed by Owens-Corning, Wilson Sporting Goods and Regional Hospital. He was an Industrial Electrician. Stan was a patriot, honoring God and his country during his service in the United States Army. Stan served in Vietnam as an Infantry Soldier with the 1st Cavalry Division from 1969-1970. His remaining time was spent in Warzburg, Germany with the Third Infantry Division, He enjoyed spending time encouraging other Veterans. He was a part of the VVA 995 group and was a member of the Veterans of Foreign Wars, chapter 6496. He earned many awards including Combat-Infantry-mans badge, The Bronze Star with V Device for Heroism, The Air Medal and Army Commendation Medal. He passed his patriotism down to his children and grandchildren and loved to share his experiences with them. We invite family and friends to celebrate the life of Stan Cotner at Arrington Funeral Directors. Visitation will be held on Wednesday, November 29, 2017 from 4:00 PM until 7:00 PM. The funeral service will be held at 1:00 PM Thursday, November 30, 2017 in the chapel of Arrington Funeral Directors with Tom Mapes officiating. Burial will follow at Hollywood Cemetery with a complete military farewell (VVA-995 Honor Guard). The pallbearers will be Donald Terry, Zack Terry, Brad Hurst, Tyler Hurst, Brent Smith and Tom Cummings. Honorary pallbearers are Hallie Terry, Camdyn Hurst, Makeller Smith, Keaton Smith, Griffin Smith, Chance Terry, Kris Cotner and Jason Lonon. The family would like to extend a special thank you to Avalon Hospice for their care and support. 2Timothy 4:7 “I have fought the good fight, I have finished the race, I have kept the faith.” In lieu of flowers donations are requested to be made to Youth Town of Tennessee or the Vietnam Veterans 995 Honor Guard, 285 Airways Blvd. Jackson, TN 38301. Arrington Funeral Directors, 148 W. University Parkway 668-1111 www.arringtonfuneralgroup.com

The family of Stan Cotner said their final earthly goodbyes on November 27, 2017. He was surrounded by family and was loved tremendously by all who knew him. He was born on April 8, 1950 to the late Harvey and Tommie Sowell Cotner. He was... View Obituary & Service Information

The family of Stan Cotner created this Life Tributes page to make it easy to share your memories.

The family of Stan Cotner said their final earthly goodbyes on...