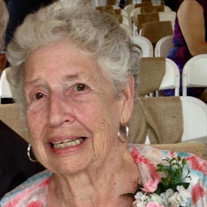 Shirley J. Sage, age 86, died on Tuesday, August 13, 2019 at her residence surrounded by family under the care of Tennessee Quality Hospice. She was born in a small community south of Columbus, GA, the daughter of Huey and JimmieLee Kennedy.... View Obituary & Service Information

The family of Shirley J. Sage created this Life Tributes page to make it easy to share your memories.