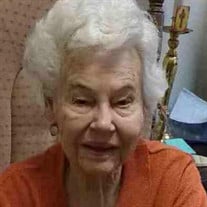 Sara Jane Johnson, 92, died peacefully with her family at her side Monday afternoon July 2, 2018 at Bells Nursing Home and Rehabilitation Center. She was born in Memphis, TN December 12, 1925, the daughter of the late John Allen Evans and Bessie Catherine Pritchard. She moved to Jackson, TN from Fort Worth, TX in 1938. She graduated Jackson High School, then attended Mississippi State College for Women and was a member of the Rogue Social Club at Mississippi State. She graduated from Union University with a B.S. Degree. While at Union she was a member of Chi Omega Fraternity (was not called sorority in those days) and Alpha Delta Kappa International Sorority for Women’s Education. She taught school forty-two and a half years with most of those years in Jackson. She was a member of Alpha Delta Kappa Teachers Sorority. She married the late William Neill Johnson October 1, 1949 at First Christian Church where she was still a member. She always said her purpose in life was to pray for others and read her Bible every day. She loved to travel, and her most memorable trip was with a group to The Holy Land guided by Dr. Charles Stanley. Sara is survived by her daughter Susan Johnson Mathieu (Paul) of Jackson, TN, son, John Neill Johnson (Punporn), of Jackson, TN, five grandchildren, four great grandchildren, two great great grandchildren, and four special nieces and nephews. SERVICES: Funeral services will be conducted Thursday, July 5, 2018 at 10:00AM in the chapel of Arrington Funeral Directors with Steve Altheide, Pastor officiating. Burial will follow in Ridgecrest Cemetery. Those serving as pallbearers will be Danny Dudley, Richard Lewis, Paul Evans, Phillip Evans, Zach Coleman and Christopher Coleman. The family will be receiving friends Thursday from 9:00AM until 10:00AM prior to service. The family would like to extend a heartful appreciation and thank you for the care given to her by her special caregivers, Charlotte Allen, Cynthia Mathis, Angela Cole, Carrie Mae Bardwell, the entire staff of Bells Assisted Living Care, Bells Nursing Home, Asera Care Hospice and loving appreciation to Connie Coleman for her continuous care and support. The family has requested In lieu of flowers that memorial contributions be directed to First Christian Church, 1347 Campbell St, Jackson, TN 38305 or LeBonheur Children’s Hospital, 848 Adams Ave., Memphis, TN 38103. Arrington Funeral Directors, 148 W. University Parkway, Jackson, TN 38305.731.668.1111 www.arringtonfuneralgroup.com

Sara Jane Johnson, 92, died peacefully with her family at her side Monday afternoon July 2, 2018 at Bells Nursing Home and Rehabilitation Center. She was born in Memphis, TN December 12, 1925, the daughter of the late John Allen Evans and... View Obituary & Service Information

The family of Sara Jane Johnson created this Life Tributes page to make it easy to share your memories.

Sara Jane Johnson, 92, died peacefully with her family at her...