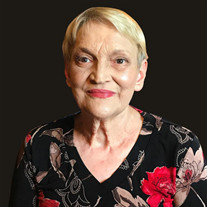 Sandra Jean MacDiarmid (“Sandy” or “Miss Sandy”), age 73, of Jackson, TN, peacefully drifted off this mortal coil on Wednesday, January 13, 2021, to whatever dreams may come. Sandy was an amazing woman. She was born in Waukegan, Illinois on May 14, 1947, to the late John and Frances Irene (Kinczewski) Bicanic. Her childhood involved Catholic schools, piano lessons, and poodle skirts, as well some things she actually enjoyed. She loved the Windy City and the countless hours she spent there with her dad. She loved the art museum, the food, the lights, and an old roller derby venue that is now a church. From an early age, after her mother passed unexpectedly, Sandy understood that life is fleeting. As such, she lived her life with a fearless zest. She was a virtuous wife and a loving mother of three. She was a natural artist and a diligent worker. She was an outdoors-woman and a courageous adventurer. She was a compassionate teacher and a perpetual student of life. She was also a first-rate smart-ass that reveled in a good joke or a prank. Yes, Sandy absolutely was an amazing woman that made numerous contributions to this world and certainly earned her place in it. She provided 33 years of dutiful service to the Jackson Parks & Recreation Department. She loved her work and, for the most part, she loved her colleagues. She ran the summer day camps and advanced the preservation of the city Parks. She hosted and taught art classes, cooking classes, space camps, archeology camps, and astronomy camps, to name just a few. She guided camping trips, rafting trips, caving trips, and rock-climbing trips to boot. She wrote grants that received government awards resulting in funding for Parks & Recreation initiatives. She also traveled extensively to receive said grants and to promote Jackson’s initiatives to help enrich the lives of its residents. Through her work is how most people will remember Miss Sandy. Her family and friends, however, had the good fortune to know her best. They know that she truly was an amazing woman, and they will carry her memory with them always and forever into whatever dreams may come. Survivors include 2 sons, Leslie MacDiarmid of Jackson, TN, and Aaron MacDiarmid of Grove City, OH; 1 daughter, Sheila MacDiarmid of Jackson, TN; and 1 sister, Christine Bicanic of Ahmeek, MI; She is also survived by many friends and neighbors who mourn her passing. A Memorial Service with the family will be at Arrington Funeral Directors on Saturday, February 6, 2021 from 10:00 a.m. until 1:00 p.m.. Arrington Funeral Directors is honored to serve the family of Sandra Jean MacDiarmid.

The family of Sandra Jean MacDiarmid created this Life Tributes page to make it easy to share your memories.