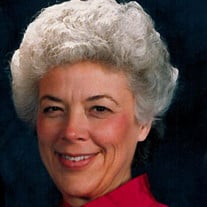 Sandra Van Eman was born August 28, 1937 to Erma and Blaine Van Eman while they lived in the small village of Elgin, Ohio, surrounded by the farm lands of western Ohio. While she was still in Elementary School, a visiting cousin introduced her to his friend, Bill Richardson. A friendship blossomed. A few months of letter writing followed, after which the friendship flamed out. Two or three years later (they could never completely agree on the exact time frame), they met again on the campus of Mt. Vernon Academy, the Conference boarding academy. Halfway through their academy years, a spark was again ignited that gradually warmed into the flame of love that lasted 61 years, after 4 years of courtship. They married on June 8, 1958, after their junior year of college. Following Seminary, they moved to a pastorate in Columbus, Ohio where Sandra taught in a one room, multi-grade elementary school. In February of 1961 she took maternity leave to delivery Cindy, their elder daughter. Two years later in a neighboring district of Findlay, Ohio, she delivered their second daughter Cheri. Some three years later found them at a boarding academy in Massachusetts where Sandra taught a small elementary school class in their home so she could keep a close eye on her growing girls. From Massachusetts they moved, in 1967 to Keene, Texas where Sandra taught third grade in a large elementary school, which one year, included daughter Cindy. Cindy often speaks of that year as one where she got the reverse of favoritism from the teacher. In 1971 Sandra again took maternity leave to deliver Steve. Knowing her husband’s slightly limited memory of dates, she made the birthdays easy for him to remember by delivering all three babies (no C-sections), on the same 28th day of three different months—February, May and June—also, in keeping with her own birthday, which was another 28th –of August. After Steve was born, Sandra worked in the College library in Keene until their move to Angwin, California, where she again worked in the library of Pacific Union College. After only two years, in 1977, Bill accepted a call to Andrews University in Michigan where, again Sandra worked in the University library. After a few years, the University developed a new Physical Therapy department and hired Sandra to be the Executive Administrative Assistant where she worked until retirement. But she came out of retirement for two more years when the Communication Department was in dire need of a Departmental Administrative Assistant. In 2009, for their retirement years, they moved to Bells, Tennessee, to be near Cindy and Roy Schmidt. The first year in their new house Sandra lived alone when Bill accepted the invitation of the Andrews President to return as a one-year Interim Provost. In 2013 Sandra got the dreaded diagnosis of Alzheimers, the disease that had taken her mother. In spite of many crippling symptoms, she was able to stay at home until August of 2019 when she was admitted to the Bells Nursing Home where she died in the early hours of Nov 20, 2019. The Bible says she was made of dust and to dust she will return. But this is not ordinary dust. The markings in her Bible make clear that she had accepted that mysterious spark which Scripture calls the image of God. So that turned it into a celestial dust that God will never lose sight of. And one day soon, He will gather it back together and in that resurrected form, we will once again hold hands. Your forever Husband, Bill SERVICES: The family will be receiving friends on Sunday, November 24, 2019 from 4:00 to 6:00 P.M. and on Monday, November 25, 2019 from 10:00 A.M. to 12:00 Noon with a Celebration Of Life service at 12:00 P.M. with Pastor John Baker Officiating. Arrington Funeral Directors, 148 W. University Parkway, 731-668-1111

Sandra Van Eman was born August 28, 1937 to Erma and Blaine Van Eman while they lived in the small village of Elgin, Ohio, surrounded by the farm lands of western Ohio. While she was still in Elementary School, a visiting cousin introduced her... View Obituary & Service Information

The family of Sandra Van Eman Richardson created this Life Tributes page to make it easy to share your memories.