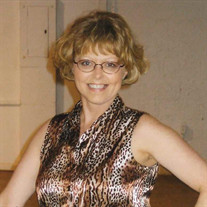 Samantha J. Turner, age 53 died on Thursday, January 21, 2016 at the Jackson Madison County General Hospital. Samantha was born in Jackson, TN on July 3, 1962, the daughter of the late Franklin Eugene and Brooksie Josephine Replogle Lawrence. Her working career included NOMA, Black & Decker, Kerr Plastics and currently Kirkland’s for the past six years. She was also a licensed cosmetologist. Her hobbies included antiques and drawing, as well as many river activities. She had a passion for cats and loved to care for them. She attended Campbell Street Church of Christ. She is survived by her husband, Allen Turner; her daughter, Leigh Ann McLemore and sister, Melonie Grice all of Jackson, TN SERVICE: A funeral service will be held at 7:00 PM Tuesday, January 26, 2016 in the chapel of Arrington Funeral Directors, with Bill Mitchusson, officiating. The family will be receiving friends from 4:00 PM until 7:00 PM on Tuesday, January 26, prior to the service at Arrington Funeral Directors. A graveside service will be held at 11:00 AM Wednesday, January 27, 2016 at the Nance Church of Christ Cemetery near Alamo, TN. Pallbearers will be Billy Cromwell, Glenn Hughes, Raynell Turner, Dewayne Porter, Scott Porter and Riley Webb. Honorary pallbearers will be Glenn Allen, David Cook, Andy Porter and Kirkland co-workers, John Morrow, Chris Rice and Evan Kennedy. The family is requesting memorial contributions to be directed to the Jackson-Madison County Humane Society, 23 Pinnacle Drive, Jackson, TN 38301 or to the charity of the donor’s choice. Arrington Funeral Directors, 148 W. University Parkway, 668-1111 www.arringtonfuneralgroup.com

The family of Samantha J. Turner created this Life Tributes page to make it easy to share your memories.