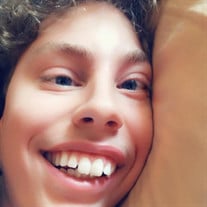 Ryan Wallace Graves, age 23, of Jackson, TN, passed away at Jackson-Madison General Hospital on Monday, December 7, 2020. Ryan passed from this life in the embrace of his dedicated and loving parents, and his first walk was into the arms of his Savior. Praise be to the Lord, Ryan is now completely free, hearing and seeing clearly all that the Lord has prepared for those who love Him, walking streets of gold and dining at the table of the King. Ryan was born in Jackson, TN on Tuesday, August 5, 1997, to Robin and Mitzi (Frix) Graves. Throughout his life, Ryan learned to enjoy many things. He loved driving his powerchair, especially going on his many daily community outings. Computer games were an important pass time and Mexican food was a must. Ryan and his family attended Englewood Baptist Church where Ryan was actively involved in the “Special Buddies” program. His greatest love was the enjoyment he got from the constant touches and kisses he got from his family and his caregiver of 14 years, Jeanette Plunkett. His smile was contagious and his laughter filled the room with love and happiness. He will be missed by all who knew and loved him. Ryan is preceded in death by his grandparents Ed and Sue Youngblood of Union City, TN. Survivors include his loving, devoted Parents: Robin and Mitzi Graves of Jackson, TN; his Grandparents: James and Maye Frix of Henderson, TN; Aunts and Uncles: Anthony and Kindra Frix, Carey Frix and Nicole Jennings, and Terry Graves. He is also survived by his treasured caregiver Jeanette Plunkett. Visitation with the family will be at Arrington Funeral Directors on Thursday, December 10, 2020 from 12:00 p.m. until 2:00 p.m.. Funeral Services will be held at 2:00 p.m. on Thursday, December 10, 2020, at Arrington Funeral Directors with Reverend J.V. Davis officiating and burial to follow in the Ridgecrest Cemetery. Arrington Funeral Directors is honored to serve the family of Ryan Wallace Graves.

Ryan Wallace Graves, age 23, of Jackson, TN, passed away at Jackson-Madison General Hospital on Monday, December 7, 2020. Ryan passed from this life in the embrace of his dedicated and loving parents, and his first walk was into the arms of... View Obituary & Service Information

The family of Ryan Wallace Graves created this Life Tributes page to make it easy to share your memories.