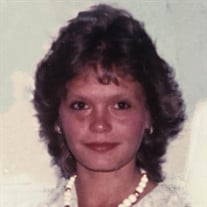 Ruthie Dean Bunch, age 58, of Jackson, passed peacefully in her home surrounded by the love of her family after a courageous battle with cancer. Ruthie was born in Tiptonville, TN on Wednesday, June 12, 1963, to the late Guy Whitt and Mary (Hipps) Whitt. Other than her father she is preceded in death by her beloved brother, Paul Whitt. Ruthie married Steve Bunch, the love of her life, in 1987. They shared 34 years of faithful marriage. During their marriage they made their family complete with the addition of their son, Steven, Jr. who combined with their daughters Cassie and Christy made their life’s journey together as a family happy and one to be admired. A woman of many talents, she spent many years working in the manufacturing industry. Even though she enjoyed working outside the home Ruthie found her greatest pleasures while taking care of her family. She faithfully attended to the needs of her husband, children and grandchildren. Ruthie possessed a servant’s heart and challenged life’s adversities with an open heart, an open-mind and an open door to anyone she encountered. She was a safe-haven for her family, friends or anyone who found themselves in a tough situation. She loved unconditionally and was known for being the family caretaker, and the most beloved and trusted confidante. Ruthie was relentless in the commitment of caretaker to her mother when the roles were reversed and her mother needed her to be. Being of small stature, Ruthie often found herself the brunt of “short” jokes but was unaffected as her feisty spirit and quick-witted personality could keep laughter in the room for hours. Her smile was contagious and her hugs incomparable. At the age of 56, Ruthie was baptized into Christ at Diamond Grove Church of Christ. She loved the Lord and was thankful for her salvation. Survivors include her devoted husband, Steve; her son, Steven Bunch, Jr. and his wife, Kimber; daughters, Cassie Lee and husband, Ray, and Christy Bunch all of Jackson, TN; grandchildren, Jessica Rogers, Samantha Terry, Amber Terry and Elijah Terry; brother, Guy Whitt and sister, Judy Whitt as well as many friends and neighbors who also mourn her passing. A graveside service will be held on Monday, October 11, 2021, at 12:00 p.m. at Highland Memorial Gardens with her nephew Jeff Whitt officiating.

Ruthie Dean Bunch, age 58, of Jackson, passed peacefully in her home surrounded by the love of her family after a courageous battle with cancer. Ruthie was born in Tiptonville, TN on Wednesday, June 12, 1963, to the late Guy Whitt and Mary (Hipps)... View Obituary & Service Information

The family of Ruthie Dean Bunch created this Life Tributes page to make it easy to share your memories.

Ruthie Dean Bunch, age 58, of Jackson, passed peacefully in her...