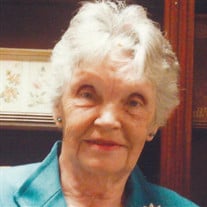 Ruth Eleanor Williams, age 85, of Jackson, TN passed away peacefully in her home on February 8, 2022 in Wildersville, TN. Ruth was born March 10, 1936 in West Bethlehem Township, PA, daughter of Samuel Cooper Shrontz and Florence Donahoo Shrontz. Mrs. Williams was a 1954 graduate of West Bethlehem Township High School and 1957 graduate of Washington Hospital School of Nursing. Her life took her to many states and many churches. She was a member of Northside Church in Jackson, TN. She was a life member of the Order of the Eastern Star. Ruth enjoyed forty plus years of marriage with Robert E. Williams, who died suddenly July 9, 2003 in Sterlington, LA. Surviving her are three sons, Scott Kevin Williams of Havana, FL, Jay M. Williams (Jamie) of Westcliffe, CO, and Ernie S. Williams (Darla) of Wildersville, TN; three grandchildren, Robert John Williams, Selena Leann Williams, and Dakota Evan Williams; brother, Charles David Shrontz (Ellen) of Lisban, OH; one great-grandson; and six nieces and nephews. In addition to her husband and parents, she was also preceded in death by an infant brother and grandson, Zachary Cole Williams. A Celebration of Life will be held 4:00PM Thursday, February 17, 2022 at Arrington Funeral Directors. Visitation will be one hour prior to the service. Rev. Bruce Little will officiate. In lieu of flowers, Ruth would like donations to be made to the Order of the Eastern Star. Checks made to Martha V. Paul Chapter 404 and mailed to 44 West Wheeling Street, Washington, PA 15301. Arrington Funeral Directors. 148 W. University Pkwy, Jackson, TN 38305. 731.668.1111

The family of Ruth Eleanor Williams created this Life Tributes page to make it easy to share your memories.