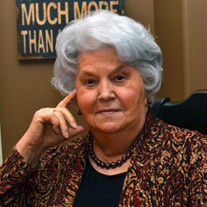 Mrs. Ruby Elizabeth Bowman Shoe passed away at her home on December 2, 2020. Born in White Fern, Henderson County, Tennessee, to the late Floyd and Laura Mae (Teddington) Bowman on February 17, 1926, Mrs. Shoe had three siblings who preceded her in death: Royce W. Bowman, Irene Blurton and Gladys Davis. Married to her devoted husband, William Leonard (Bill) Shoe, for 68 years before his death in 2014, Mama Shoe, as she was known, leaves two daughters: Phyllis Shoe and Linda Austin (husband Jim) of Jackson; two devoted granddaughters: Whitney Brooks (husband Dallas) of Starkville, Mississippi, and Shay Ingram of Jackson; three amazing great-grandchildren: Carly Ingram (17), Reed Ingram (14) and Austin Brooks (10). Mrs. Shoe grew up in Gibson and Madison Counties and graduated in the second class of North Side High School in 1943. She met Bill in Beech Bluff, Tennessee, before he joined the Marine Corps and served in WWII until the war ended in 1945. Bill described Ruby as “the most beautiful girl he’d ever seen,” and photographs bear that out. They married on May 25, 1946. Bill often said of her: “She is not the wind beneath my wing; she is my wing.” Mrs. Shoe’s life was completely selfless. She devoted herself to making a peaceful home and to loving and rearing her children. She was among the first employees hired at Jackson’s Sears Store at Old Hickory Mall in 1965 where she retired after 28 years of distinguished service. Mrs. Shoe was an unprecedented seamstress; she made wedding gowns, prom dresses and anything else her girls wanted or needed. She was a member of Daughters of the American Revolution and loved gardening, cooking and serving. Mrs. Shoe was quiet and soft-spoken. While Bill was recognized as a teacher of God’s word, Ruby demonstrated how to live and lead with Christ-like love. Her children call her the ideal Proverbs 31 example: “a virtuous and capable wife…clothed with strength and dignity.” The family wishes to express sincere appreciation to Dr. Greg Mitchell for his professional commitment and personal devotion to the care of both our parents, and to Hospice of West Tennessee Healthcare. Due to Covid restrictions, the family held a private graveside service with burial at Ridgecrest Cemetery on Friday, December 4. In lieu of flowers, memorials to Le Bonheur Children’s Hospital and Hospice of West Tennessee Healthcare are appreciated.

The family of Ruby Shoe created this Life Tributes page to make it easy to share your memories.

Mrs. Ruby Elizabeth Bowman Shoe passed away at her home on December...