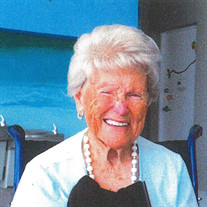 Rosemary was born on January 24, 1920. She died on July 23, 2015 in Daytona Beach, FL. Tressa Mae Moore Smith and Sidney Smith Sr. welcomed their baby girl in Texarkana, Arkansas, where Rosemary grew up. A devoted wife from the time she married her husband, Hubert Andrew Richardson in 1945 until his death in 1997, she entered whole-heartedly into his agenda whether presiding over daily lunches with whomever he would bring home unannounced, to walking 10 miles a day at his side after being in the Pritikin Center in California. They lived for many years in Jackson Tennessee and Daytona Beach, Florida, where she managed the El Caribe Resort. Rosemary personified Southern gentility in appearance and in manner. Never without her pearls in later years, her quiet unassuming dignity and gracious demeanor endeared her to all who knew her as did her beautiful smile The fact that she embodied whole-hearted, loving acceptance is especially remembered by her five children: one daughter, Mary Ann, and four sons, Joseph Sidney (Vickie), William Andrew (Leanne), James Edward, and John Hubert (Megan). A faith-Filled and loyal listener, counselor and friend, she will be greatly missed by her children, her seven grandchildren: Sidney Ann, Liam Wesley and Graylynn Aubri-all Richardsons! All of us are grateful for Rosemary’s special caregiver, Harry Horetz. SERVICES: Funeral services will be held Wednesday, July 29, 2015 at 2:00PM at First Presbyterian Church. The family will receive friends Tuesday, July 28, 2015 from 5:00PM until 7:00PM at Arrington Funeral Directors. There will be a private family burial at Ridgecrest Cemetery. The family has requested in lieu of flowers, donations be made to the First Presbyterian Church, 1573 N. Highland Ave., Jackson, TN 38301 or the First Presbyterian Church of Daytona Beach, Florida. Arrington Funeral Directors, 148 W. University Parkway, Jackson, TN 38305. 7831.668.1111. www.arringtonfuneralgroup.com.

Rosemary was born on January 24, 1920. She died on July 23, 2015 in Daytona Beach, FL. Tressa Mae Moore Smith and Sidney Smith Sr. welcomed their baby girl in Texarkana, Arkansas, where Rosemary grew up. A devoted wife from the time she... View Obituary & Service Information

The family of Rosemary Smith Richardson created this Life Tributes page to make it easy to share your memories.