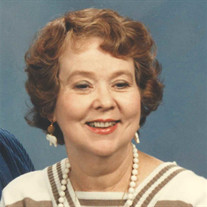 Rosemary Mestan was born to Clone and Maude Ford in Hattiesburg, Mississippi on November 6, 1931. She died in the home of her dreams, her spirit went to Paradise on January 24, 2016. Rosemary was a faithful member of North Jackson Church of Christ. Rosemary was an avid reader and an accomplished seamstress. She started making her own clothes as a teenager and continued for many, many years. Her mother was her tutor. Rosemary met her future husband Walt in 1950, at the time Walt was pitching baseball for the Jackson Generals. The two married in 1952. Rosemary loved her Atlanta Braves Baseball team. She graduated from Jackson High School in Jackson, TN and attended Freed Hardeman in Henderson, Tennessee as an English major. Her first job out of college was at the National Life and Accident Insurance Company in Jackson. Later, Rosemary’s friend Kay Rukavina got her a job at the Jackson-Madison County General Hospital which lasted 33 years. Quoting Beth Naylor...”In 1969 Rosemary Mestan began working for Jackson-Madison County General Hospital as the secretary to the associate administrator. What began as a job for her, soon became a love affair for the rest of the employees. Rosemary’s kindness has endeared her to the people with whom she worked. After 33 years there are many hearts breaking because Rosemary is retiring” the spring of 2002 edition of the Tennessee News is dedicated to Rosemary. Throughout her career, Rosemary has been instrumental in supporting Jackson Madison County General Hospital’s administration with unwavering loyalty. She has served three administrators: Dr. John R. Thompson, Jr. Lacy Williams and Jim Moss. She has been responsible for recording decisions and activities of the Board of Trustees. However, her legacy for kindness will outlast our memories of her duties. Co-worker Mary Frances Christie recalled, “When I came to General Hospital in 1979, my closest work neighbor was Rosemary Mestan. She became my mentor as I learned how to perform the job of an executive secretary. She was the epitome of efficiency, courtesy and diplomacy. A fountain of knowledge about the hospital and the community it serves. I treasure our twenty plus years of friendship and wish her all the best for all her life. We are friends forever, and I hope when we get to heaven that her mansion is next to mine, just life that first office I had at General Hospital.” Jim Moss made much ado at Rosemary’s hospital retirement. The executive office area was renamed the “Rosemary Mestan Executive Office Suite”. A bronze plaque was placed at the entry to the suite, and a lager bronze plaque was placed in the hall of honor next to plaques of Lacy Williams and Jim Moss. Proclamations were presented by the city and county mayors recognizing Rosemary’s many contribution to the hospital and community. All who knew Rosemary remember her beautiful radiant, sincere smile and her love for the Lord. She made a lasting impression on many in her lifetime, as she made a wonderful difference in many lives, loving others from all walks of life. She will be greatly missed by all but she left the world a better place because of the beautiful life she lived. A Big thank you to Jim Moss, a special Boss and personal friend, the special friends of the North Jackson Church of Christ who looked out for her needs, last but not least to Hospice of West Tennessee for their impeccable care. She is survived by her husband Walt Mestan; a daughter, Marilyn Killiam; a son, Wally Mestan; six grandchildren and fifteen great grandchildren. She was preceded in death by her brother, Jack Ford. SERVICES: A funeral service will be held at 2:30 PM Wednesday, January 27, 2016 in the chapel of Arrington Funeral Directors with David Powell, Minister officiating. Burial will follow in Highland Memorial Gardens. The family will receive friends on Wednesday from 12:00 PM until 2:00 PM at Arrington Funeral Directors. In lieu of flowers memorial contributions may be made to North Jackson Church of Christ, 2780 Hwy 45 Bypass, Jackson, TN, Jackson Christian School, 832 Country Club Lane, Jackson, TN or Freed-Hardeman University, Henderson, TN. Arrington Funeral Directors, 148 W. University Parkway, 668-1111 www.arringtonfuneralgroup.com

Rosemary Mestan was born to Clone and Maude Ford in Hattiesburg, Mississippi on November 6, 1931. She died in the home of her dreams, her spirit went to Paradise on January 24, 2016. Rosemary was a faithful member of North Jackson Church of... View Obituary & Service Information

The family of Rosemary Mestan created this Life Tributes page to make it easy to share your memories.

Rosemary Mestan was born to Clone and Maude Ford in Hattiesburg,...