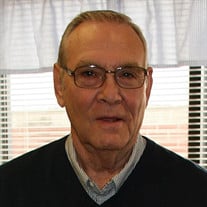 Ron O’Neal, 71, died Friday, May 27, 2016 at his residence with his family by his side. He was born in Tupelo, MS, January 3, 1945 the son of the late Carl William O’Neal and Eunice Prescott Putt. Ron was a Vietnam Era Veteran serving in the Army as a 1st. Lt. He was a graduate of Mississippi State University in 1967. He was a member of the Bulldog Club at Mississippi State and an active member of West Jackson Baptist Church. He served on the welcoming committee and was an active participant in the GROW Ministry. He was a faithful member of the Tim Fortner Sunday School Class. Ron was an encourager and a giver. He had a heart for those in need and a special concern for local missions. Ron was retired from the heavy equipment sales industry, where he dedicated his career. He is survived by his wife, Celia Scott O’Neal of Jackson, TN, one son Robert William “Will” O’Neal, Jr. and wife Tammi, one daughter Jan O’Neal Lambert and husband Chris, four grandchildren, Katie Lambert, Eli Lambert, Ty O’Neal and Joshua O’Neal. He is also survived by his mother Eunice Prescott Putt. Ron was preceded in death by his beloved grandmother Katherine Horton Prescott. SERVICES: Funeral Services will be held Tuesday, May 31, 2016 at 11:30AM at West Jackson Baptist Church with Dr. Jerry Tidwell officiating. Burial will follow in Highland Memorial Gardens. The family will be receiving friends Tuesday from 10:00AM until service time at 11:30AM at the church. The family has requested that memorial contributions be directed to West Jackson Baptist Church Benevolence Fund, 580 Oil Well Rd., Jackson, TN 38305 or RIFA, 133 Airways Blvd., Jackson, TN 38301. Arrington Funeral Directors, 148 W. University Parkway, Jackson, TN 38305. 7831.668.1111. www.arringtonfuneralgroup.com

The family of Ron O'Neal created this Life Tributes page to make it easy to share your memories.