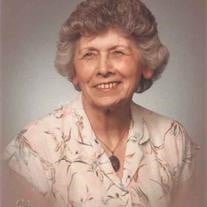 Roberta M. Vegors of Jackson passed away on April 13 at age 93 after a short illness. She was born on August 29, 1918, near Stanhope, Iowa, and raised in central Iowa. She was an excellent student, and graduated valedictorian of her high school class. There was not enough money during the Depression to continue her education, although she was offered several scholarships. So after graduation she travelled alone by train to Los Angeles, California. There she saw the ocean for the first time, and instantly had a lifetime love for the beach. Because of her cooking and homemaking skills she was quickly hired as governess for the children of actor Lon Chaney, Jr. Later she married Halsey Vegors, a fellow Iowan attending UCLA, whom she had dated in high school. After his graduation their life together took them to Washington, D.C. and Virginia during war time, and then to Texas, Alabama, Georgia, and Maryland. She worked as a laboratory technician and nutritionist for the U.S. Department of Agriculture for more than 25 years, and was involved in some of the first human studies on cholesterol. Her co-workers remember her for the excellence of her work, her cheerful disposition, and the baked goods from her oven that was shared by all with morning coffee. She saved diligently to be sure that all of her children had the opportunity to go to college, but gave generously to those in need ? a lesson she passed on to her children. By example they taught their children that all honest work is honorable. She and her husband took pride in growing beautiful roses, luscious raspberries, and colorful zinnias. Despite worsening arthritis during her last years, she maintained a positive outlook and a pleasant smile.She is preceded in death by her loving husband of 62 years. She is survived by her three children and their spouses ? Nancy and Harold Martin of Asheville, North Carolina; John and Ginger Vegors of Jackson, Tennessee; and Bob and Sue Vegors of Jackson, Tennessee; and grandchildren Deborah Dickerson and husband Jim of Knoxville, Tennessee; Sharon Reed and husband Mike of North Augusta, South Carolina; Joshua Vegors and wife Lisa of LaVergne, Tennessee; Rachel Vegors of Jackson, Tennessee; and great- grandchildren Heather and Lauren Dickerson, David and Michal Reed, and Clark and Elijah Vegors.The family will be receiving friends at Arrington Funeral Home on Thursday, April 19 from 4 to 6, with a memorial service to follow. Graveside services will be held at the historic Vegors Cemetery near Webster City, Iowa, on Tuesday April 24th at 11 AM. In lieu of flowers, the family requests that donations in her memory be sent to Regional Interfaith Association, 219 North Highland Avenue, Jackson, TN 38301; or Area Relief Ministries, 108 South Church Street, Jackson, TN 38301. The family wishes to thank the staff of Regency Retirement Village and Jackson Meadow for their loving care during the last few years. Arrington Funeral Directors 148 W. University Parkway 731/668-1111 www.arringtonfuneralgroup.com

Roberta M. Vegors of Jackson passed away on April 13 at age 93 after a short illness. She was born on August 29, 1918, near Stanhope, Iowa, and raised in central Iowa. She was an excellent student, and graduated valedictorian of her high school... View Obituary & Service Information

The family of Roberta Vegors created this Life Tributes page to make it easy to share your memories.