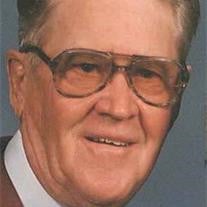 Graveside services for Robert B. Trogden, 96, will be held Monday, November 21, 2011 at 11:00AM at Memorial Park Cemetery in Memphis, TN. with Rev. Barry Scott officiating. Mr. Trogden died Saturday morning November 19, 2011 at Northbrooke Health Care Center in Jackson, TN. Mr. Trogden was born October 8, 1915 in Obion County, the son of the late George W. and Ruth White Trogden. He graduated from Tech High Scholl in Memphis, TN in 1934. He managed an electrical shop in Clarksdale, Mississippi until 1945 when he joined the U. S. Navy. After completing electrician school he served on the Vessel U.S.S. Admiral R.E. Coontz in the Pacific. He received a Victory Medal and an Asiatic-Pacific Medal for his service during World War II. He worked at International Harvester, Memphis Works, as an electrician for 28 years until his retirement. In 1966 he was nationally honored by Harvester for the best suggestion out of 8,303 submitted. The suggestion reduced the cost of using welding gun nozzles by 52 per cent. He flew to Chicago for the presentation with the executive officers of International Harvester Company. He was a member in standing with the Masons Chapter Summer Avenue, Memphis, TN. He and Dot enjoyed golf together from age 15. He won several local golf tournaments. He and Dot spent 25 years traveling in their RV and visited almost every state. In later years, they spent the winter months in Winter Haven FL and enjoyed golf most every day. He leaves behind many friends over the years in Florida and Memphis. He was a member of Aldersgate United Methodist Church in Jackson, TN. He is survived by his wife of 72 years, Dorothy ?Dot? Trogden of Jackson, TN, one son Donald R. Trogden of Jacksonville, FL, one daughter Barbara Bean and husband Fred Bean of Jackson, TN, grandchildren, Wendy Wood Pine and husband Jim of Nashville, TN, Great Grandchildren Kristi Pine, Steve Pine, Grandson Craig Wood and wife Kristin of Nashville, TN, Great Grandchildren Liana Wood, Liam Wood, Step Grandchildren Cindy Bean Roberson and Alan Bean and their families, a niece and nephew Ruth Yarbrough and Steve Yarbrough of Houston, TX. He was preceded in death by two brothers Warren Trogden of Haddinfield, NJ and J. W. Trogden of Memphis, TN and one sister Marie Reeder of Houston, TX. The family has requested memorial contributions be directed to Aldersgate United Methodist Church, 1050 N. Parkway, Jackson, TN 38305 or to the charity of the donor?s choice. The family will be receiving friends Sunday, November 20, 2011 from 5:00PM until 6:30PM at Arrington Funeral Directors. A very grateful family extends their heartfelt gratitude and appreciation to the caregivers at Northbrooke Health Care. Arrington Funeral Directors, 148 W. University Parkway, Jackson, TN 731-668-1111 www.arringtonfuneralgroup.com

The family of Robert Trogden created this Life Tributes page to make it easy to share your memories.

Graveside services for Robert B. Trogden, 96, will be held Monday,...