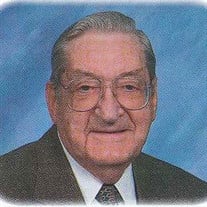 Robert N. Nolen, 99 years, 10 months and 18 days died February 15, 2017 at Brookdale Jackson Oaks. Mr. Nolen was born March 28, 1917, in Hardin County, Sardis, Tennessee, the son of the late James I. Nolen and Rosie Cherry Nolen. He was a graduate of Pinson High School, West Tennessee Business College and took Several courses through the American Institute of Banking. He was also a graduate of the L.S.U. School of Banking. Mr. Nolen retired as Vice President of the National Bank of Commerce. Mr. Nolen became a Christian at an early age. He had been a member of West Jackson Baptist Church for over 68 years. He served as a deacon, finance chairman and treasurer. He taught a class of young men for over 20 years and taught a senior men’s class for several years. Mr. Nolen was a member of Knights of Pythias for over 60 years and he was a charter member of the Kiwanis Club of Jackson, where he served as secretary and on several committees over the years. At one time, he served as treasurer of the March of Dimes. He was a member of the American Legion, having proudly served in the U.S. Army during World War II. He was married to Wilma Upton Nolen who preceded him in death on January 19, 2000, after 52 years of marriage. Mr. Nolen was preceded in death by two sisters, Carrie Nolen of Enville, TN and Mrs. Tommie Hart of Jackson, TN, Three brothers, James Paul Nolen of Memphis, TN, John Roy Nolen of Memphis, TN, and L. C. Nolen of Jackson, TN. He is survived by several nieces and nephews. SERVICES: Funeral services will be Wednesday, February 22, 2017 at 11:00AM with a visitation starting at 9:30 AM all at West Jackson Baptist Church with Rev. Ron Hale officiating. Burial will follow in Highland Memorial Gardens. Those serving as pallbearers will be Michael Harwood, John Marley, Wade Yancey, Randy Butler, Brandon Butler and Roy Yancey. The family has requested that in lieu of flowers that memorial contributions be directed to West Jackson Baptist Church, 580 Oil Well Rd, Jackson, TN 38305. Arrington Funeral Directors, 148 W. University Parkway, Jackson, TN 38305. 731-668-1111 www.arringtonfuneralgroup.com

The family of Robert Nolen created this Life Tributes page to make it easy to share your memories.