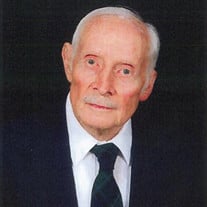 Robert Harold Mathis, age 87, died August 12, 2018 of complications due to congestive heart failure. Robert was preceded in death by his father and mother, Reverend William Douglas Mathis, Sr. and Jeannette Armstrong Mathis; a sister, Mable Jeannette Webster; and a brother, William Douglas Mathis, Jr. Robert was born in Memphis, TN, and raised in Biloxi, MS. After serving in the U. S. Army during the Korean War, Robert completed his education, receiving two degrees from the University of Southern Mississippi, and worked on additional doctoral studies at Auburn University and the University of Alabama. Robert met his wife, Audrey (Dolly), in Foley, AL while pursuing a career in education as a teacher at Foley High School. While in Foley, he also coached football, basketball and track. Together, Robert and Dolly raised three daughters – Nelda, Melinda and Patricia. The family moved to East TN where Robert began his college teaching career at Tennessee Wesleyan as an Assistant Professor of History. Robert moved the family to West Tennessee in 1967 where they made their home in Jackson. He became an Associate Professor of History and Political Science at Lambuth University and the Department Chair, retiring in 2001. Professor Mathis was also involved in numerous professional associations, including the West TN Historical Society, the Scottish Historical Association, the American Historical Society; and was awarded the title of Tennessee Colonel by Governor Don Sundquist in 1998. Always interested in sports and physical fitness, Robert was a swimmer, a lifeguard, a martial arts student and instructor, and participated in track and field events in the Senior Games. Robert Mathis was a life-long Presbyterian, and a member of First Presbyterian Church, Jackson, TN, serving as Deacon, Ruling Elder and Clerk of Session. He had a particular passion for RIFA, Habitat for Humanity, and the Tuesday Men’s Coffee Group. He is survived by his beloved wife, Audrey; three daughters - Nelda Rhodes (Wayne), Melinda Thomas (Jesse), Patricia Mathis; five grandchildren – Douglas Jones (Bobbie) and their children, Chris, Bradyn, and Easton; Lee Hays (Sophie) and their children, Elyse and Hutton; Russell Jones (Carrie) and their children, Logan and Caleb; Lauren Lindsay (Tyler) and their children, Gavin, Ronan, Keiran, Robbie and Griffin; and Hunter Gray (Kelsi). A Memorial Service will be held at First Presbyterian Church, 1573 N. Highland Ave., Jackson, TN 38301, on Sunday, August 19, 2018 at 2 PM in the Sanctuary. A reception and time of visitation will be held immediately following the service in Memorial Hall. Interment will be at Ridgecrest Cemetery in a private family graveside service. In lieu of flowers, the family requests that contributions be directed to First Presbyterian Church for the Room in the Inn ministry.

The family of Robert Harold Mathis created this Life Tributes page to make it easy to share your memories.