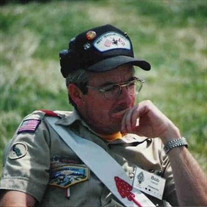 Robert Lynn “Bobby” Carroll, age 69, entered his heavenly home on October 28, 2021, at his Lavinia, TN residence. Bobby was born in Jackson, TN on February 9, 1952, the son of the late T.R. and Frances Odell Carroll. He was a 1970 graduate of Southside High School and maintained close friendships with many of his classmates throughout his life. He was retired from Procter & Gamble as a production technician. After retirement he opened a small engine repair service named “Broken Heart,” because according to his family he could repair everything but a “broken heart.” He was a member of Evangelical Community Church for more than thirty years. He was a veteran of BSA with fifty-five years of service, and was a recipient of the Silver Beaver Award, an award bestowed to individuals who have made an impact on the lives of youth through their service given to the local BSA council. He had a servant’s heart and lived out his faith in Jesus Christ over the years by caring for others and assisting them however he could. He was a constant supporter and encourager to his children and grandchildren with any and all of their interests and activities. One of his many joys was teaching his grandchildren how to gracefully lose at playing Rummy. Bobby is survived by his loving wife, with whom he “endured” forty-nine years of marriage, Kerry Long Carroll of Lavinia, TN; three wonderful children and their spouses, Adam Carroll of Lavinia, TN, Jason Carroll and wife Jennifer of Jackson, TN and Katie Kennedy and husband Timothy of Jackson, TN; three grandchildren, who affectionately called him “E-Daddy”, Rachel Anne Carroll, Kerry Colleen Kennedy, and Robert Jackson Carroll, all of Jackson, TN; sisters, Sandra Hudiburg of Nolensville, TN; Bess Henry and husband Don of Biloxi, MS; and brother, Pat Hundley and wife Susan of Knoxville, TN; and sister-in-law, Ellen Stafford and husband Tony of Holladay, TN; brother-in-law, Bill Moorman and wife Marilyn of Clearwater, FL; brothers-in-law Mike Long, Ricky Long and wife Brenda, and David Long, all of Jackson, TN, and Danny Long of Tokyo, Japan. And a host of others who affectionately knew him as “Uncle Bobby”. He was preceded in death by his parents; Beloved friend and father-in-law, John R. Long, Jr. and Mother-in-law Betty Long; brother-in-law, Butch Hudiburg; and sisters-in-law, Kathy Moorman and Teresa Long. SERVICES: A graveside service will be held at 10:00 AM Wednesday, November 3, 2021, at Ridgecrest Cemetery with Ricky Long officiating. The family will be receiving friends and family from 5:00 PM until 7:00 PM on Tuesday, November 2, 2021, at Arrington Funeral Directors. In lieu of flowers the family is requesting that memorial contributions be directed to West Tennessee Area Council BSA, 1995 Hollywood Drive, Jackson, TN 38305.

The family of Robert Lynn “Bobby” Carroll created this Life Tributes page to make it easy to share your memories.