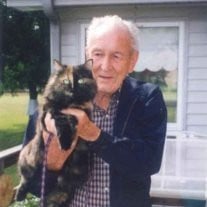 Robert Merle Dixon, 88, died on Wednesday, June 12, 2013 at his Jackson residence. He was born on September 11, 1924 in Andalusia, AL. Bob was the second oldest child of John and Pearl Dixon. He was predeceased by Maggie Hammac, his older sister, Mildred Shaw, his younger sister and John Alexander Dixon, who died in infancy. Bob’s younger brother Walter Dixon lives in their hometown of Andalusia, AL with his wife Marie. Bob served in the Army Air Corps as a flight engineer, gunner and reconnaissance photographer. He flew 65 missions in the South Pacific campaign against the Japanese. He was also an aircraft crew member during the Berlin Airlift in 1948-49. In 1950 he married Shirley Weaver, daughter of John and Mabel Weaver. After Bob’s separation from the Air Corps, they settled in Jackson, TN and opened a photography studio, then proceeded to build it into a large commercial photo processing laboratory. They sold the business and retired in 1985. Bob and Shirley were happily married for sixty-three years. They were partners in business, and soul mates for life. They had three daughters, Linda Stilwell, married to Jim Stilwell, residing in Jackson, TN. Tracy Meggs, married to Dale Meggs, residing in Cookeville, TN and Lorna O’Leary, married to Scot O’Leary, residing in Guntersville, AL. Bob and Shirley are also the proud grandparents of Wesley Stilwell, married to Julie and Rev. Benjamin Stilwell-Hernandez, married to Keila. They are also proud great grandparents of Nathan, Emma and Jeshua. Two words that best describe Bob and Shirley are “devoted” and “proud”. They always encouraged their children and grandchildren in all their pursuits. And they always spoke with pride of each child and their accomplishments. They were the ultimate role models for their children, and all who knew them. Bob and Shirley were fortunate to enjoy world wife travel and adventures in their retirement years. They also enjoyed spending time with their family and friends. In the last months of his life he was lovingly cared for by his family and dear caregivers, Serena and Margaret. The family is requesting that memorial contributions be directed to Youth Town, PO Box 1385, Jackson, TN 38302-1385 or to RIFA, 133 Airways Blvd., Jackson, TN 38301. Services: Funeral services will be held at 3:00 PM Saturday, June 15, 2013 in the chapel of Arrington Funeral Directors, with Rev. John Middleton and Rev. Ben Stilwell-Hernandez officiating. Burial will follow in Highland Memorial Gardens. The family will be receiving friends on Friday, June 14, 2013 from 5:00 PM until 7:00 PM at Arrington Funeral Directors, 148 W. University Parkway, Jackson, TN 731/668-1111 www.arringtonfuneralgroup.com

Robert Merle Dixon, 88, died on Wednesday, June 12, 2013 at his Jackson residence. He was born on September 11, 1924 in Andalusia, AL. Bob was the second oldest child of John and Pearl Dixon. He was predeceased by Maggie Hammac, his older... View Obituary & Service Information

The family of Robert Merle Dixon created this Life Tributes page to make it easy to share your memories.