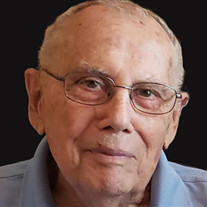 Robert J. Dickensheets, or Bob to all but his wife, died on July 31. 2021 in Jackson, TN. Bob was born on July 3, 1933 in Wichita, Kansas to Kathryn and Harrison Dickensheets. In 1948 the family moved to Wellington, Kansas when Bob’s father purchased a farm equipment dealership. Bob graduated from the University of Kansas in 1955 at which time he was commissioned an ensign in the U.S. Navy. His active duty assignment was to the Navy Exchange at Treasure Island in San Francisco Bay. He was discharged from the Reserves as a Lieutenant. Bob received an MBA degree with honors from the University of Michigan in 1958. He joined General Electric’s Marketing Management Program after graduation and took his first permanent position at the International General Electric Co. (IGE) where he later became the Manager of Marketing Research. Subsequently he moved to GE’s corporate headquarters in several business development assignments. In 1961 he married Elaine Morton, who also worked at IGE, and they moved to an apartment overlooking the Hudson River. During their New York stay Bob worked on his PhD degree at New York University. This effort was cut short by extensive international travel and their transfer to Geneva, Switzerland, where they lived for four years with their three children: Hans, Kristen and Karl. Bob managed European Strategic Planning. After returning to the U.S. Bob had additional staff assignments at GE’s new headquarters in Fairfield, CT and in Hartford and Indianapolis. In 1981 he joined Westinghouse Electric and, after a short consulting position in Pittsburgh, became Marketing Manager of a division in Buffalo. In 1988, as part of a merger with the European electrical equipment giant ABB, he managed planning and R&D operations in the Philadelphia area. He then transferred to Jackson, TN as the Vice President and General Manager of ABB’s operation in Alamo, which included plants in Alamo and Mayaguez, Puerto Rico, and an engineering operation in Pittsburgh. He retired from ABB in 1997. Bob traveled widely through Western and Eastern Europe, Central and South America and in Asia and the Far East, visiting 55 countries. His interests were many: first and foremost, the growth and development of his children and grandchildren. He enjoyed all sports, was a Judo player and coach, skied in the U.S. and Europe, and was an active golfer since childhood. In addition, he sang in choral music groups, played the piano and was an avid reader. At St. Mary’s church he was for many years a regular participant in a scripture study group and was a member of the parish Finance Council for almost 20 years. He is survived by his wife of 59 years, Elaine, and his children, Hans (Kathy), Kristen Barber (Joel Bradley), and Karl. Bob will also be fondly remembered by his five grandchildren, Elizabeth, Karl William, Robert, Samantha and Shaiyah. Services: The family will be receiving friends on Tuesday, August 3, 2021 from 1:00 P.M. to 2:00 P.M. at St. Mary’s Catholic Church with a service following at 2:00 P.M. with Father Richard Cortese officiating. A private family burial will occur at a later time. The family is requesting that memorial contributions be directed to Catholic Relief Services at 228 W. Lexington St., Baltimore, Maryland 21201-3443 or Doctors Without Borders USA at P.O. Box 5030, Hagerstown, MD 21741-5030. Arrington Funeral Directors, 148 W. University Parkway, 731-668-1111 https://www.arringtonfuneralgroup.com/live-webcasting/

Robert J. Dickensheets, or Bob to all but his wife, died on July 31. 2021 in Jackson, TN. Bob was born on July 3, 1933 in Wichita, Kansas to Kathryn and Harrison Dickensheets. In 1948 the family moved to Wellington, Kansas when Bob&#8217;s... View Obituary & Service Information

The family of Robert J. Dickensheets created this Life Tributes page to make it easy to share your memories.

Robert J. Dickensheets, or Bob to all but his wife, died on July...