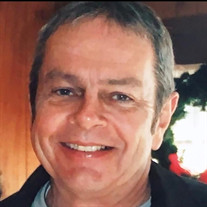 Richard Joel Tedford, age 68, of Jackson, Tennessee, a hardworking, humble and devoted husband, father, son, brother and loyal friend entered eternal life on June 29, 2021, at his residence. Richard was born in Jackson on Thursday, November 20, 1952, the son of Harold and Marcine (Poteete) Tedford who survive. On August 16, 2020, Glenna (Ferree) Tedford, his beloved wife of 10 years preceded him in death. Richard and Glenna joined in marriage on March 31, 2010, after spending almost 15 years together. Other than his wife he was preceded in death by both his maternal and paternal grandparents. During his high school career at Southside High School, Richard was a bass player with a band called “The Metallics”. He carried his love for music with him throughout his life’s journey. Before being discharged from the United States Army, Richard served as a medic while stationed at Tripler Army Medical Center in Hawaii. Richard was a man of many talents and of committed passions. He was self-employed working in the automobile industry as a salesman for most of his adult life. He loved the Lord and was a member of the Meridian Baptist Church for many years. Always ready to cheer on his favorite team, Richard was an avid fan of the Detroit Red Wings. Richard is survived by a son, Richard Brian Tedford and a daughter, Heather Tedford both of Murfreesboro, TN; a granddaughter, Kaylie Pham and a grandson, Nicholas Tedford; his two sisters, Julie Blackmon and Pattie Mosier; several nephews, a special friend, Jim Pruitt and treasured sister-in-law, Beth Burkhardt, as well as many neighbors and friends who will also mourn his passing. With a genuine smile and a contagious laughter, he will be remembered for his charismatic and charming ways. He will be deeply missed, yet lovingly remembered by those who knew him. A Memorial Service with James Baxter officiating will be held on Saturday, July 17, 2021, at 12:00 p.m. in the chapel at Arrington Funeral Directors. The family will receive visitors from 11:00 a.m. until time for the service time. Memorials may be made to the Jackson-Madison County Humane Society, 3107 Paul Coffman Drive, Jackson, TN 38301 or http://www.jmchs.com Online condolences can be made at https://www.arringtonfuneralgroup.com. Service arrangements were trusted to Arrington Funeral Directors & Crematory, 148 West University Parkway, Jackson, TN 38305-1616, (731) 668-1111.

The family of Richard Joel Tedford created this Life Tributes page to make it easy to share your memories.