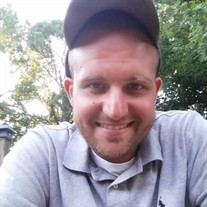 Cory Hudgings, age 29, died peacefully on May 26, 2020 at the Jackson Madison County General Hospital. Cory was born in Jackson, TN on July 26, 1990, the son of Richard (Ricky) E. Hudgings and Tonya Perkins Hudgings. He was employed by Keith Longworth in the Restoration Construction Industry. He was a graduate of the College of Applied Sciences with a certification in Heating and Cooling systems. Cory was a loveable individual that enjoyed a good practical joke on family and friends. He was a very avid outdoors person who enjoyed hunting, fishing, and playing golf. He could also be found at a bowling alley working on his game. He had previously bowled two perfect games of which he was very proud of. His favorite professional teams were the Green Bay Packers in football and the New York Yankees in baseball. He is survived by his wife, Kendra Hudgings; his twin sons, Jaxson Paul and Paxton James Hudgings and son, Richard Carson Hudgings; his parents Ricky and Tonya Hudgings; his sister, Bethany Worley; Kendra’s parents, Bernadette Chaney and Ronald Lowe; Ricky’s parents, Richard E. and Rebecca Hudgings; aunts and uncles, Donna, Rita, Randy and Ronny and numerous cousins. He was preceded by his grandmother Betty Marchbanks and an uncle, Kevin Perkins. SERVICES: With social distancing restrictions in place, a funeral service will be held at 11:00 AM Tuesday, June 2, 2020 in the chapel of Arrington Funeral Director, with Bob Layman and Tom Burrus officiating. Burial will follow in Highland Memorial Gardens. The family will be receiving friends from 5:00 PM until 7:00 PM on Monday, June 1, 2020 at Arrington Funeral Directors. Pallbearers will be Ryan Hudgings, Shane Davidson, Jeremy Tucker, Ethan Perkins, Steven Hunt and Willie Chaney. Cory, always a caring and generous person continued to give after his death. His final gift was the gift of life as an organ donor. If you wish to support with a monetary gift it can be directed to Tennessee Donor Services, 1600 Hayes Ave. # 300 Nashville, TN 37203. or DonateLifeTN.org. Arrington Funeral Directors, 148 W. University Parkway 668.1111 www.arringtonfuneralgroup

Cory Hudgings, age 29, died peacefully on May 26, 2020 at the Jackson Madison County General Hospital. Cory was born in Jackson, TN on July 26, 1990, the son of Richard (Ricky) E. Hudgings and Tonya Perkins Hudgings. He was employed by Keith... View Obituary & Service Information

The family of Richard Cory Hudgings created this Life Tributes page to make it easy to share your memories.