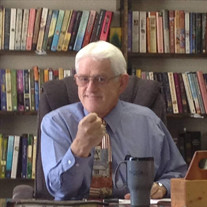 Rev. Richard Randolph Harper, age 81, died on Wednesday, May 29, 2019, at the Jackson Madison County General Hospital. Richard was born in Newport, TN on January 30, 1938, the son of the late Walter Allen and Josephine Lile Harper. He served his country in the United States Army. Rev. Harper pastored in the Nazarene Church over thirty years and later served as a chaplain, recruiter, and trainer with Marketplace Ministries for more than twenty-five years. After retirement he stayed very active in his local church, often filling pulpits for vacationing ministers. He enjoyed working in his yard and as a woodworker building clocks. He was known as a “Mr. Fixit” to many, and there were not many projects he couldn’t do. His current church was Northside United Methodist Church. He is survived by his wife of fifty-nine years, Roberta Garrett Harper, of Jackson, TN; his son, Scott Harper and wife Dr. Andrea Harper of Jackson, TN; his daughter, Ruth Ellen Matteson of Marquette, MI; his sister, Virginia Link and her husband Orvan Link of South Carolina and three grandchildren: Darcy Harper, Wesley Matteson, and Samuel Matteson. SERVICES: A funeral service will be held at 1:30 PM on Tuesday, June 4, 2019, at Northside United Methodist Church with Rev. David O’Neal and Dr. Don Thrasher officiating. Burial will follow in Ridgecrest Cemetery. The family will be receiving friends from 11:30 AM until 1:30 PM on Tuesday, June 4, 2019 at the church prior to the service. The family is requesting that memorial contributions be directed to Northside United Methodist Church, 2571 N. Highland Ave. Jackson, TN 38305. Arrington Funeral Directors, 148 W. University Parkway 668.1111 www.arringtonfuneralgroup.com

The family of Rev. Richard R. Harper created this Life Tributes page to make it easy to share your memories.